Vikings in Ireland: A brief history

The Viking Age in Ireland.

For at least 1400 years, up to the ninth century, the civilization of Ireland remained uniformly Celtic. Then, in the year 795, came the first of the Viking attacks, on Lambay Island in Dublin Bay. This was the beginning of more than two centuries of attack and invasion which had a devastating effect on Ireland, and on the Irish monasteries in particular. 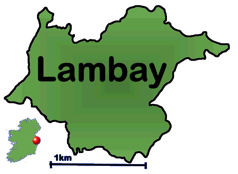 “Viking” (from the Old Norse vikingr) means “sea-rover” or “pirate”, and this is precisely what these people were. Ethnically, they were Teutons, Danish, Swedish and Norwegian farmers, fishermen and sea-merchants, who were forced onto the open sea in search of a livelihood by over-population and shortage of arable land. From the eighth century, their plundering raids terrorized much of the known world, reaching as far as America, North Africa, and Constantinople. 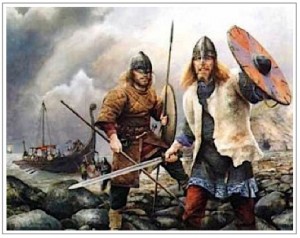 In Ireland, the annalists distinguished two groups among the raiding vikings, the Lochlainn, or Norwegians, and the Danair, or Danes, the Norwegians being described as fair, the Danish as dark. Initially, the Norwegians dominated, and their raids were sporadic and unsystematic. From about 830, however, a new phase of large-scale attacks, involving the use of fleets of long-ships, began, and the Vikings penetrated deep inland through the use of rivers and lakes. Attracted by the wealth of the monasteries and churches, they plundered them steadily. From this period date the first of the Vikings’ fortified settlements. In 852, the Danes wrested control of one of these settlements, the military and trading post of Dublin, from the Norwegians, under their king Olaf (in Irish Amlaoimh), and founded the Danish kingdom of Dublin which was to last three hundred years, until the coming of the Anglo-Normans. 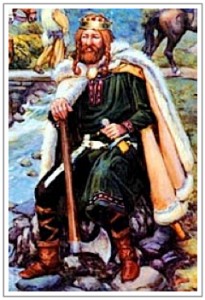 For the next 100 years, up to the middle of the tenth century, the Vikings consolidated and extended their power through unremitting aggression. From about 950 on, however, the east Clare Gaelic sept of the Dal Cais began its rise to power, capturing first the Kingship of Munster from the Eoganachta and then, with Brian Boru, taking the high-kingship of Ireland from the Ui Neill in 1002. Brian fused the disparate Gaelic forces into a single confederate army, and defeated the combined might of the Norwegian and Danish forces in the battle of Clontarf on April 23 1014, breaking the power of the Vikings permanently. 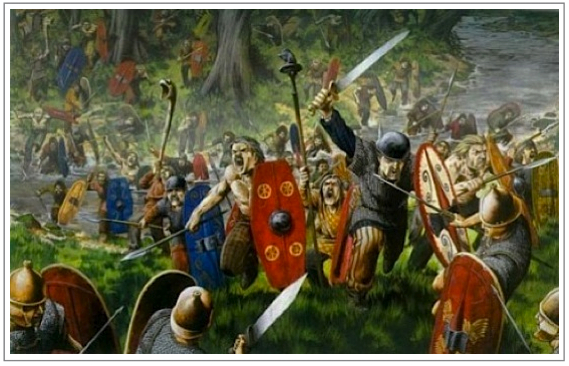 Although their political power declined rapidly after this, as a people the Vikings were soon thoroughly absorbed into the religious and political life of the country, adopting the Irish language and Irish customs, intermarrying and intermingling. Many modern Irish surnames reflect this, with McLoughlin (Mac Lochlainn) and McIvor (Mac Iomhair), for instance, deriving from a combination of the Gaelic patronymic with a Norse personal name. To them also we owe all of the earliest towns in the country: Dublin, Wexford, Waterford, Cork and Limerick all began as Viking settlements, and, even after their absorption into the Gaelic culture, the commercial interests of the newcomers kept them centered in these areas.