Does our flag mean the same to a GAA fan at Croke Park as it does to the unionists who have set it alight?

And how did it become our national standard in the first place?

The Constitution ascribes no specific symbolism to our national flag. Does it mean the same to a GAA fan at Croke Park as it does to the unionists who set two Tricolours alight in front of a crowd in Belfast last December? Flags once signified clan allegiances, demarcating enemy lines in battle. They developed from emblems on shields and armor that were later erected on poles that could be seen from afar. Ogham stones are protoflags. 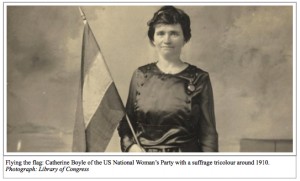 The artist Brian Hand, who teaches at Carlow Institute of Technology, suggests we look back to an Epsom Derby of a century ago for the early inspiration for our flag. On June 4th, 1913, as the racehorses rounded the final corner, the suffragette Emily Davison leaped in front of King George V’s horse and was crushed beneath it. In her hand was a tricolour scarf that she had tried to pin to the horse’s bridle. 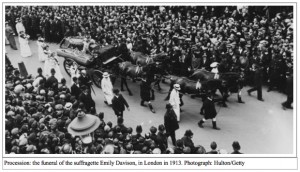 Ten days later her funeral was an international event: 6,000 women marching to the beat of 10 brass bands surrounded by the flags and banners of the Women’s Social and Political Union, in green, white and purple. It was the most prominent use of a tricolour since the French Revolution, appearing bold and clear in photographs and newsreel footage around the world. The suffragettes were brazenly presenting an alternative to imperial British society – a profoundly radical act. The New York Times hailed Davison as the “first martyr to the cause”.

It was only natural that in Ireland the nationalist movement would take note. Here was a clean-lined modern flag that would be an ideal standard of a new republic. And, sure enough, at O’Donovan Rossa’s funeral, in 1915 – the first great public propaganda event of the republican movement that would be filmed and photographed for international audiences – the Irish Tricolour was prominently draped over the coffin.

A new symbol was born – though the majority had no idea what it meant. Even during the Easter Rising, some of the Volunteers and Fianna did not recognize the flag they were told to fight to defend on the occupied buildings. To them the Irish flag was, and always had been, a gold harp on a green background.

First Appearance of the Tricolour 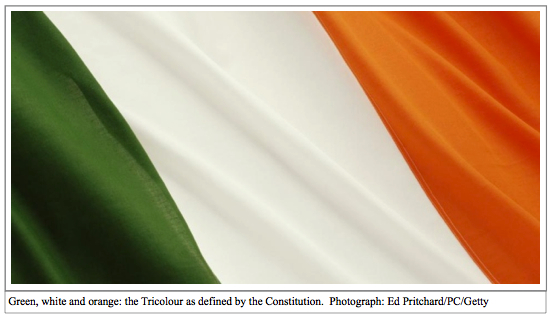 The first appearances in Ireland of the green, white and orange Tricolour date to the 1820s. It is mentioned in 1830 and 1844, but it gained prominence only in the Famine of 1848, when it appeared side by side with French tricolours at meetings held to celebrate the recent French Revolution, in March of that year. 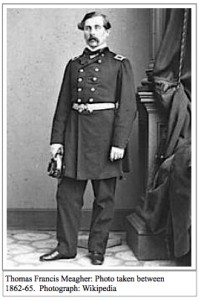 In April, Thomas Francis Meagher, the Young Ireland leader, brought home from Paris a tricolour of orange, white and green that supporters of their cause had given him. Famously, the great Fenian John Mitchel remarked: “I hope to see that flag one day waving as our national banner.”

But it failed to achieve any widespread acceptance and was markedly absent from republican, nationalist and Fenian demonstrations, campaigns, commemorations and funerals. There are glimpses of it at some St Patrick’s Day parades and protest meetings, but it is always secondary, and the colours and the order in which they appeared were never formalized.

Orange was sometimes put next to the staff, and on at least one occasion the order was orange, green and white. There’s a record from 1883 of a Parnellite tricolour of yellow, white and green, arranged horizontally.

Brian Hand asserts that by far the richest use of tricolours in these islands during this 60-year hiatus was by the suffragette movement, which adopted a variety of tricolours, the most prominent being that of the Women’s Social and Political Union. 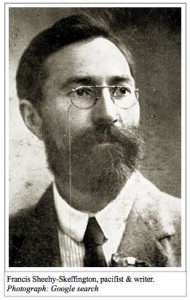 As the movement splintered over militancy, hunger strikes and other issues, new tricolours emerged, such as the green, white and gold one adopted by Charlotte Despard’s Women’s Freedom League in 1908.

Hand has gathered photographs of these tricolours at rallies and demonstrations around Ireland. They appeared on banners, shop displays, fabric, posters, pottery and badges. RM Fox writes in his 1935 book Rebel Irish Women of seeing a portrait of Francis Sheehy Skeffington, the prominent Irish suffragette and nationalist, in which “he was wearing his votes for women badge and a ribbon in the suffrage – which were also the National – colours.” If the suffragettes had indeed popularized the green, white and orange Tricolour, it must have been odd for them to find their flags so prominently displayed over Dublin’s main buildings on Easter Monday.

The most common meaning attributed to the flag is of “green” nationalists and “orange” unionists uniting in “white” peace, but why would the Irish Republican Brotherhood and the Irish Volunteers choose a flag that symbolized the hoped-for union of the people of different traditions on this island when the Irish Volunteers and the Ulster Volunteers were stockpiling guns to fight each other? It’s unlikely that one side would have used its battle flag to portray peace with its enemy – at least not until it had defeated or otherwise neutralized that opponent.

Hand argues that the Tricolour belonged primarily to the left-wing militant tradition – they alone believed that unionists and nationalists should unite against their common capitalist oppressors. It was James Connolly who brought the Tricolour to the Supreme Council, and it flew in the Rising over buildings involved in the 1913 Lockout, such as Jacob’s and Eason’s, so becoming a symbol of victory over capitalist oppression. The Tricolour was even raised over the Imperial Hotel, which belonged to William Martin Murphy, the industrialist whose mistreatment of workers sparked the lockout.

It was a demonstrably egalitarian flag: three equal bands of color, in a homologically vertical arrangement rather than a hierarchically horizontal one. 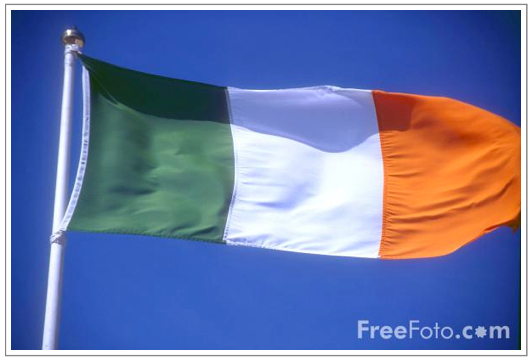 The sight of the Tricolour flying above the bombarded, burning city in Easter Week endeared it to the citizens, and in the aftermath of the Rising the nation took it as its own, the flag’s potency strengthened by the leaders’ hopelessly heroic deeds in its defense.

In the following years its status as a national flag solidified, and it was adopted by the Republic in 1919. During the Civil War both sides claimed ownership of it. The Free State government had no clear intention of adopting it as the national flag, and its destiny remained uncertain until 1937, when it was formally defined in the Constitution: “The national flag is the tricolour of green, white and orange.”

The flag has moved far from its championship of women and workers. It’s now most commonly seen draped around the shoulders of exultant sport fans on their way to a match – and, later, used like a humanitarian blanket by the same fans stumbling home, wrapped in it for consolation or warmth. But it still has potency, most noticeably in Northern Ireland, where your heartbeat eases as you pass from red, white and blue pavement into an area of green, white and orange.