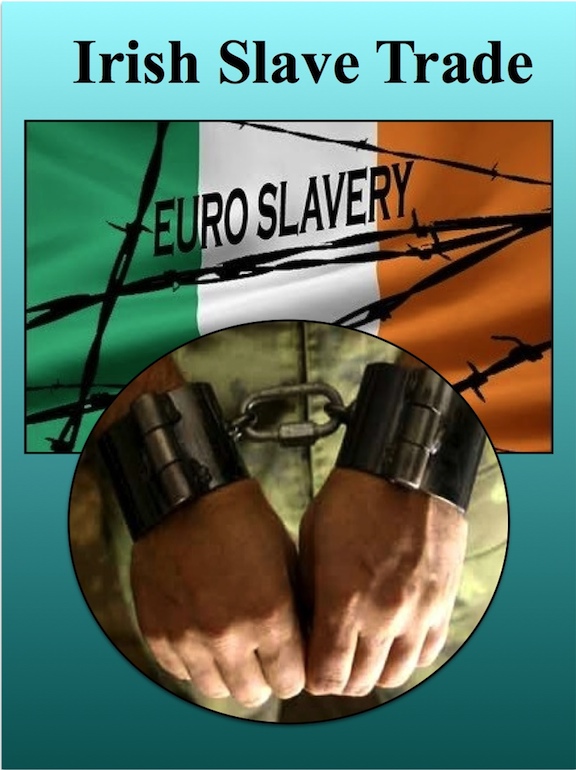 They came as slaves; vast human cargo transported on tall British ships bound for the Americas. They were shipped by the hundreds of thousands and included men, women, and even the youngest of children. 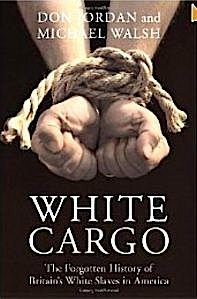 Whenever they rebelled or even disobeyed an order, they were punished in the harshest ways. Slave owners would hang their human property by their hands and set their hands or feet on fire as one form of punishment. They were burned alive and had their heads placed on pikes in the marketplace as a warning to other captives.

We don’t really need to go through all of the gory details, do we? We know all too well the atrocities of the African slave trade.

But, are we talking about African slavery? King James II and Charles I also led a continued effort to enslave the Irish. Britain’s famed Oliver Cromwell furthered this practice of dehumanizing one’s next door neighbor.

The Irish slave trade began when James II sold 30,000 Irish prisoners as slaves to the New World. His Proclamation of 1625 required Irish political prisoners be sent overseas and sold to English settlers in the West Indies. By the mid 1600s, the Irish were the main slaves sold to Antigua and Montserrat. At that time, 70% of the total population of Montserrat were Irish slaves.

Ireland quickly became the biggest source of human livestock for English merchants. The majority of the early slaves to the New World were actually white.

From 1641 to 1652, over 500,000 Irish were killed by the English and another 300,000 were sold as slaves. Ireland’s population fell from about 1,500,000 to 600,000 in one single decade. Families were ripped apart as the British did not allow Irish dads to take their wives and children with them across the Atlantic. This led to a helpless population of homeless women and children. Britain’s solution was to auction them off as well.

During the 1650s, over 100,000 Irish children between the ages of 10 and 14 were taken from their parents and sold as slaves in the West Indies, Virginia and New England. In this decade, 52,000 Irish (mostly women and children) were sold to Barbados and Virginia. Another 30,000 Irish men and women were also transported and sold to the highest bidder. In 1656, Cromwell ordered that 2000 Irish children be taken to Jamaica and sold as slaves to English settlers.

Many people today will avoid calling the Irish slaves what they truly were: Slaves. They’ll come up with terms like “Indentured Servants” to describe what occurred to the Irish. However, in most cases from the 17th and 18th centuries, Irish slaves were nothing more than human cattle.

As an example, the African slave trade was just beginning during this same period. It is well recorded that African slaves, not tainted with the stain of the hated Catholic theology and more expensive to purchase, were often treated far better than their Irish counterparts.

African slaves were very expensive during the late 1600s (50 Sterling). Irish slaves came cheap (no more than 5 Sterling). If a planter whipped or branded or beat an Irish slave to death, it was never a crime. A death was a monetary setback, but far cheaper than killing a more expensive African. The English masters quickly began breeding the Irish women for both their own personal pleasure and for greater profit. Children of slaves were themselves slaves, which increased the size of the master’s free workforce. Even if an Irish woman somehow obtained her freedom, her kids would remain slaves of her master. Thus, Irish moms, even with this new found emancipation, would seldom abandon their kids and would remain in servitude. 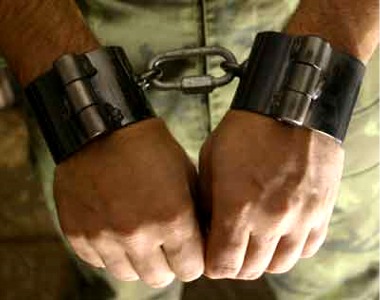 In time, the English thought of a better way to use these women (in many cases, girls as young as 12) to increase their market share: The settlers began to breed Irish women and girls with African men to  produce slaves with a distinct complexion. These new “mulatto” slaves brought a higher price than Irish livestock and, likewise, enabled the settlers to save money rather than purchase new African slaves. This practice of interbreeding Irish females with African men went on for several decades and was so widespread that, in 1681, legislation was passed “forbidding the practice of mating Irish slave women to African slave men for the purpose of producing slaves for sale.” In short, it was stopped only because it interfered with the profits of a large slave transport company.

England continued to ship tens of thousands of Irish slaves for more than a century. Records state that, after the 1798 Irish Rebellion, thousands of Irish slaves were sold to both America and Australia. There were horrible abuses of both African and Irish captives. One British ship even dumped 1,302 slaves into the Atlantic Ocean so that the crew would have plenty of food to eat.

There is little question that the Irish experienced the horrors of slavery as much (if not more in the 17th Century) as the Africans did. There is, also, very little question that those brown, tanned faces you witness in your travels to the West Indies are very likely a combination of African and Irish ancestry. In 1839, Britain finally decided on it’s own to end it’s participation in Satan’s highway to hell and stopped transporting slaves. While their decision did not stop pirates from doing what they desired, the new law slowly concluded THIS chapter of nightmarish Irish misery.

But, if anyone, black or white, believes that slavery was only an African experience, then they’ve got it completely wrong.

Irish slavery is a subject worth remembering, not erasing from our memories.

But, where are our public (and PRIVATE) schools???? Where are the history books? Why is it so seldom discussed?

Do the memories of hundreds of thousands of Irish victims merit more than a mention from an unknown writer?

Or is their story to be one that their English pirates intended: To (unlike the African book) have the Irish story utterly and completely disappear as if it never happened.

None of the Irish victims ever made it back to their homeland to describe their ordeal. These are the lost slaves; the ones that time and biased history books conveniently forgot.Synopsis

The history of the African slave trade into the America’s is one that is well-documented as well as largely taught in American schools today. However, it was not just Africans who were traded as slaves.

Indeed, the Irish have a gruesome history as being traded as slaves as well and subjected to similar and sometimes worse treatment than their African contemporaries of the time. 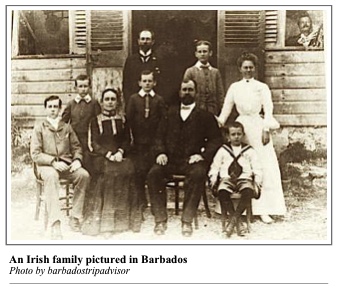 Strangely though, the history of Irish and ‘white’ slavery is by and large ignored in the American  educational curriculum today. As Martin points out, “Ireland quickly became the biggest source of human livestock for English merchants. The majority of the early slaves to the New World were actually white.” At the hands of the British, the Irish population plummeted due to the slave trade of the 17th century.

Unfortunately, the Irish slaves are often remembered as indentured servants in American history classes. However, in most cases during the 17th and 18th centuries, the Irish were no more than “human cattle.”  There were two main reasons for this treatment:  Britain’s policy of decreasing the native Irish population for resettlement purposes and the cost of the African Slave Trade, which was far more expensive then the cost of Irish Slaves. Africans would sell for around 50 sterling while Irish were often no more than 5 sterling.

In addition to this, African slaves were treated far better than their Irish counterparts. The treatment of Irish slaves was more cruel than that of African slaves. If an Irish slave was beaten by their owner, it wasn’t considered to be a crime.

The Irish were further exploited when the British began to “breed” Irish women – or girls, sometimes as young as 12 – with African males.  Martin writes that, “These new “mulatto” slaves brought a higher price than Irish livestock and, likewise, enabled the settlers to save money rather than purchase new African slaves. This practice of interbreeding Irish females with African men went on for several decades and was so widespread that, in 1681, legislation was passed “forbidding the practice of mating Irish slave women to African slave men for the purpose of producing slaves for sale.” In short, it was stopped only because it interfered with the profits of a large slave transport company.”

This Irish nightmare began to end in 1839, when Great Britain finally decided on it’s own to end its participation in the transportation of slaves.  While their decision did not stop pirates from doing what they desired, the new law slowly concluded this chapter of “Nightmarish Irish Misery”. 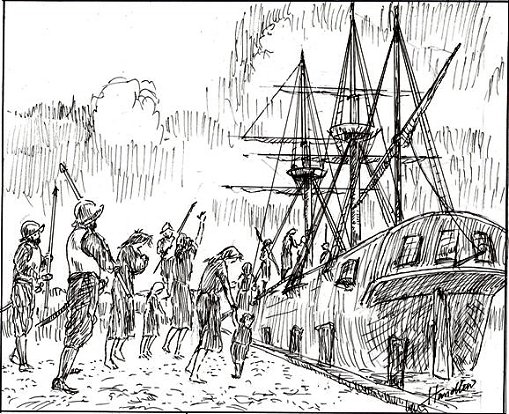 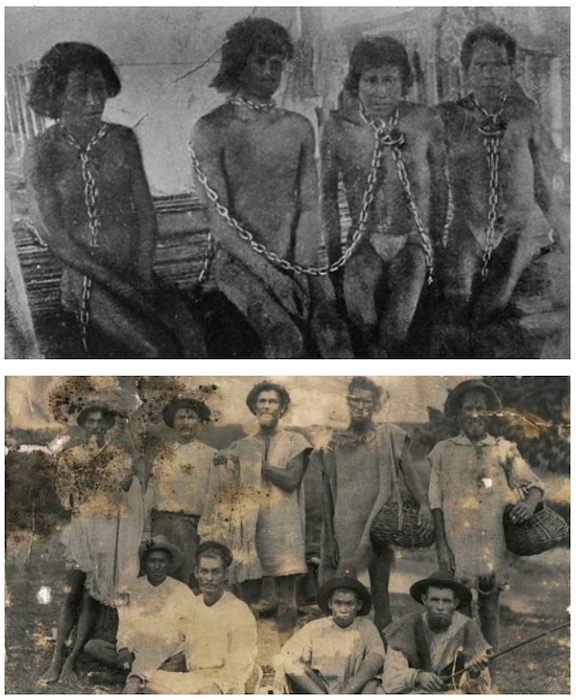 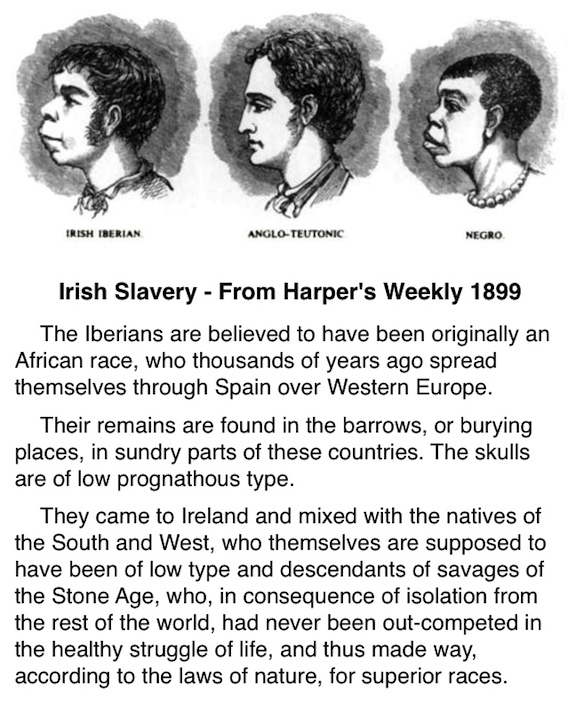 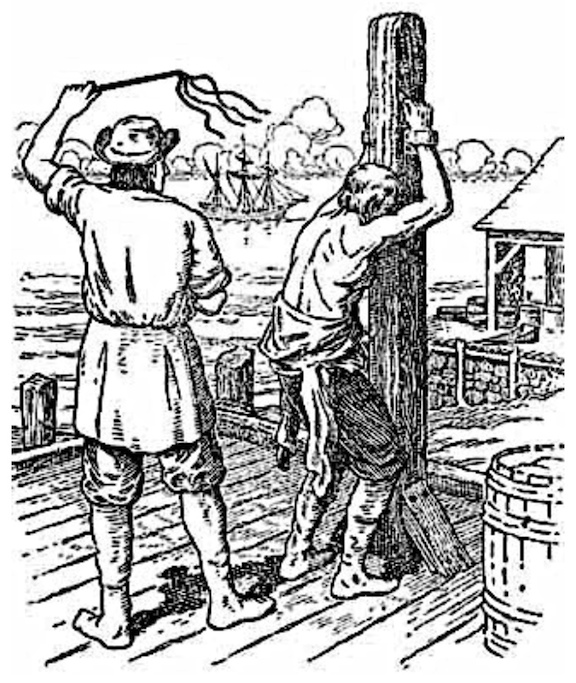 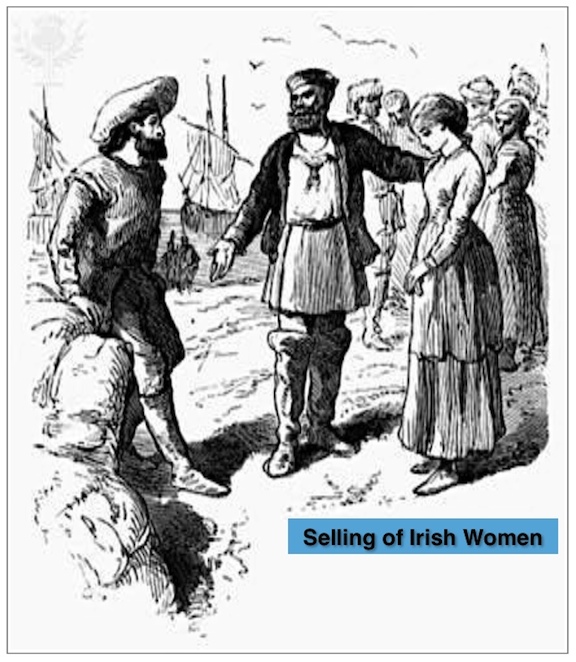 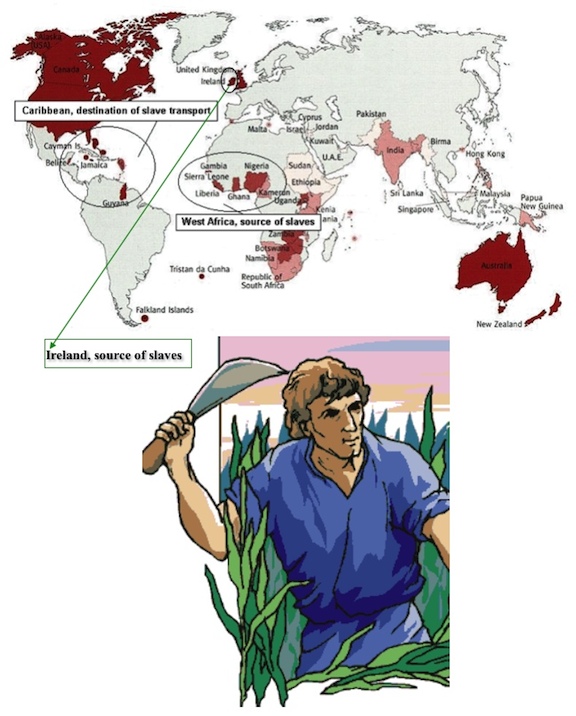 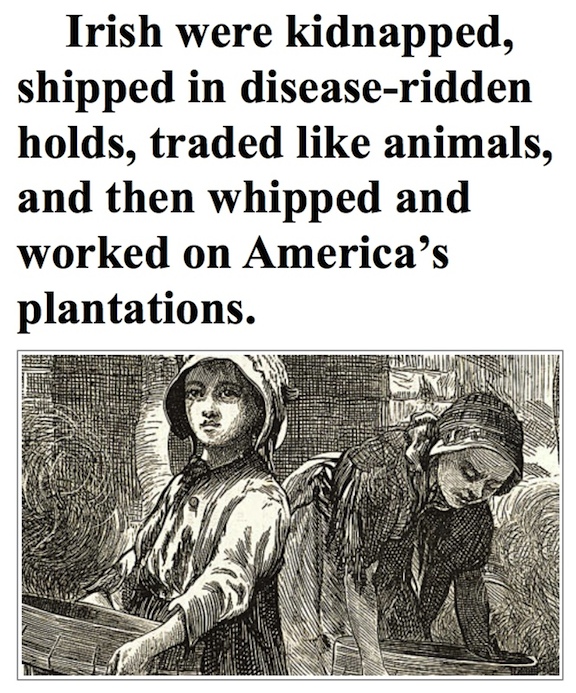 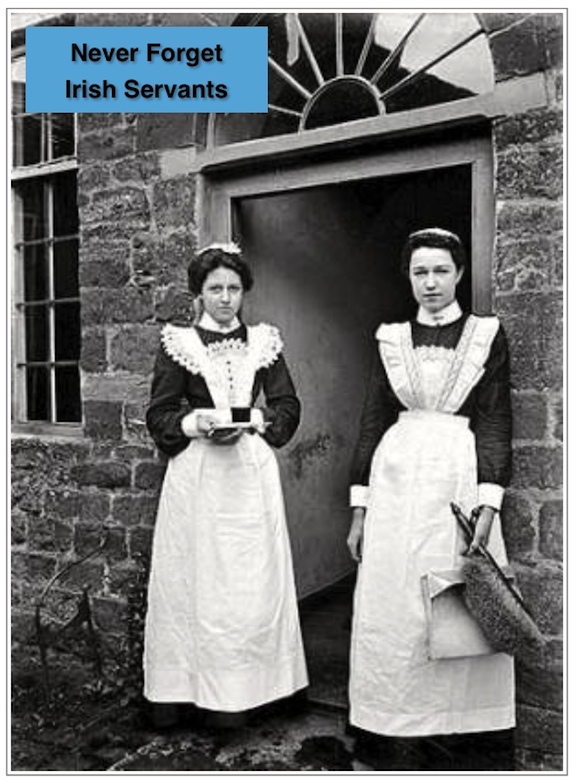 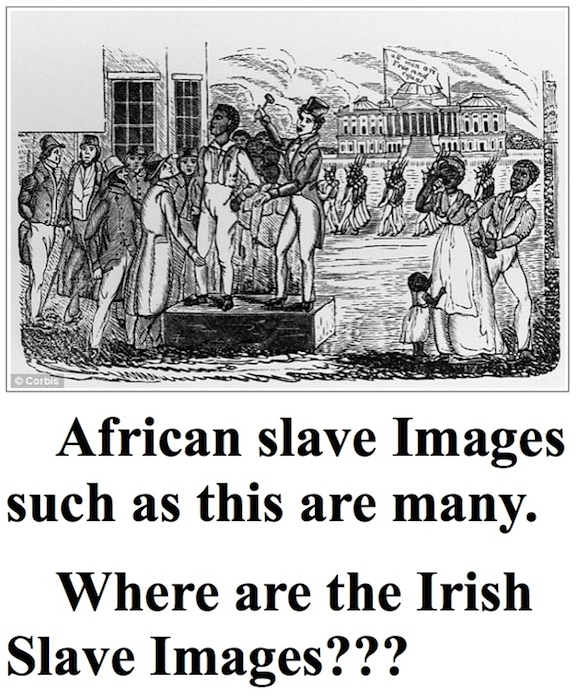 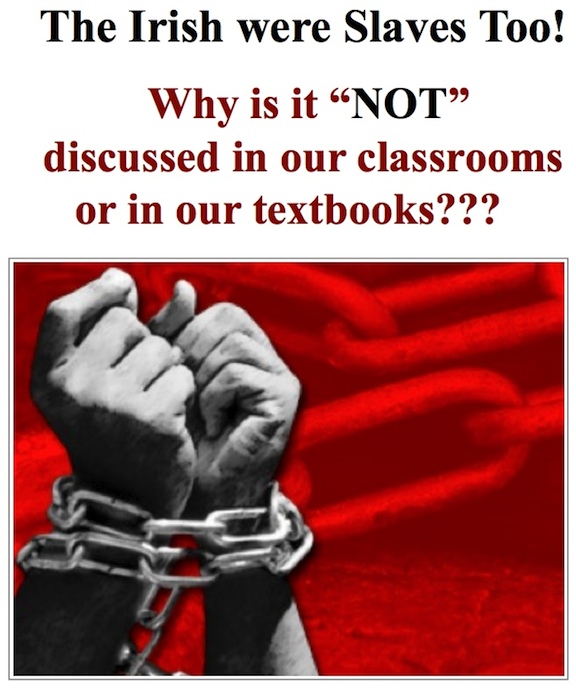