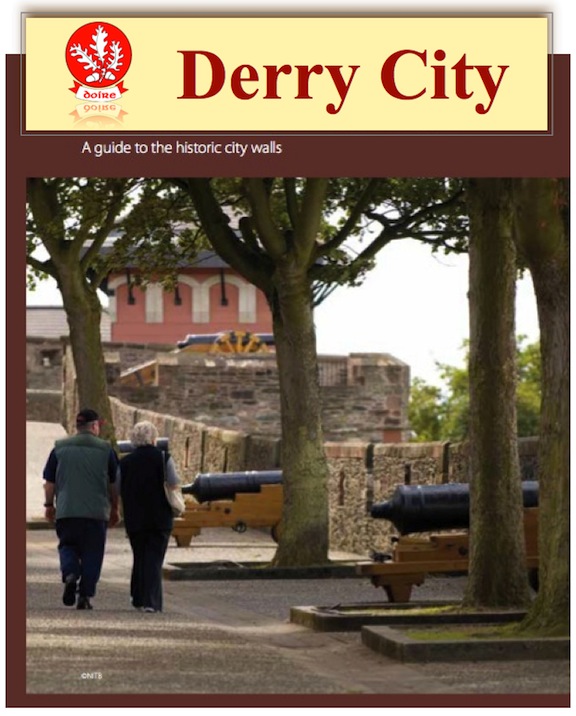 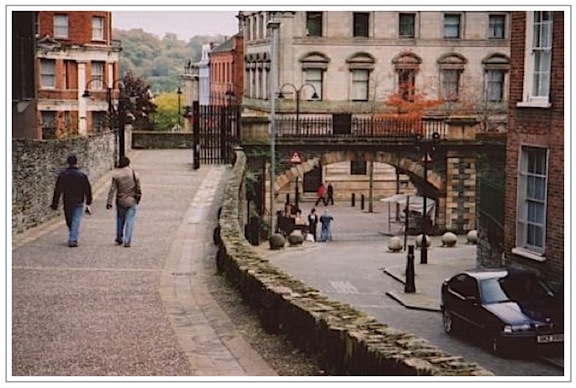 A walk around the walls in Derry reveals a splendid city crammed full of history, heritage, interest and a vibrant cultural scene.

Derry is the only remaining completely walled city in Ireland and one of the finest examples of Walled Cities in Europe. The Walls were built during the period 1613-1618 by the Irish Society as defenses for early seventeenth century settlers from England and Scotland.

The Walls, which are approximately 1.5 km in circumference, form a walkway around the inner city and provide a unique promenade to view the layout of the original town which still preserves its Renaissance Style street plan to this day.

The Walls vary in width between 12 and 35 feet. They are the most complete in Ireland and one of the finest examples in Europe of Walled Cities. The city claims Europe’s largest collection of cannons, whose origins are known precisely. Many of them were used in the two seventeenth century sieges that occurred in Derry City. In 2005 the surviving 24 cannons were restored. Craftsmen cleared the barrels from centuries of rubbish, stripped off layers of paint and corrosion, and bathed, sponged and waxed the cannons back to their former glory. The cannons are displayed throughout the City Walls with the impressive Roaring Meg located on the double bastion. 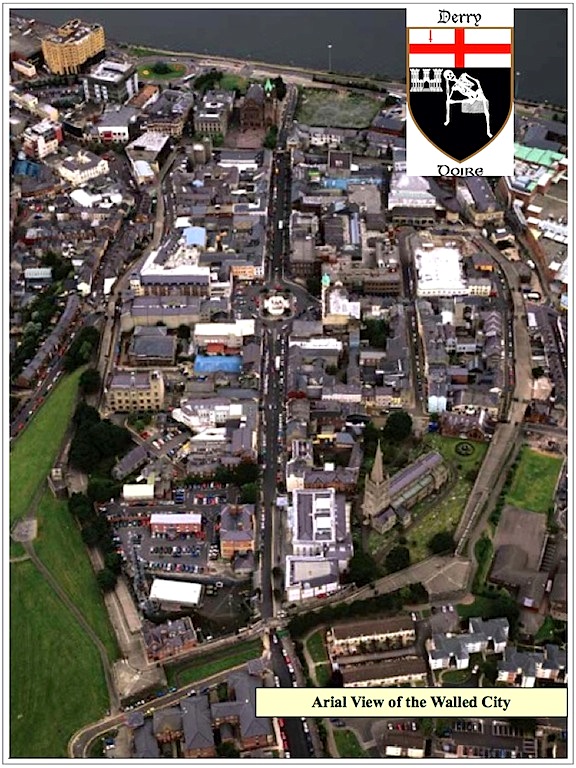 Derry City has the most complete circuit of historic walls of any town in Ireland: they stand up to 8 metres high and measure almost one mile around.

The walls were constructed between 1613 and 1618 to protect the English and Scots settlers of the new town that was established as part of the Plantation of Ulster. James I ordered this colonization with loyal, Protestant subjects in order to bring the rebellious Gaelic region firmly under the control of the English crown in 1611.

The Honorable The Irish Society was founded to take charge of the plantation, and finance was obtained from the City of London to build the walls. The new City of Londonderry was laid out as the defensive walls were being constructed.

Still seen today, the street pattern was regular, with four main streets crossing at a central square, later called ‘The Diamond’, leading straight to the four gates in the walls.

In 1689 the Catholic King James II and his supporters (Jacobites) laid siege to the city for 105 days, as part of his campaign to reclaim the English throne from the Protestant King William. Thirteen apprentices famously shut the city gates against the advancing Jacobite troops and despite fierce fighting over the weeks, the city successfully withstood the attack. The walls are still owned by The Honorable The Irish Society today, although they are now managed and conserved by the Northern Ireland Environment Agency. 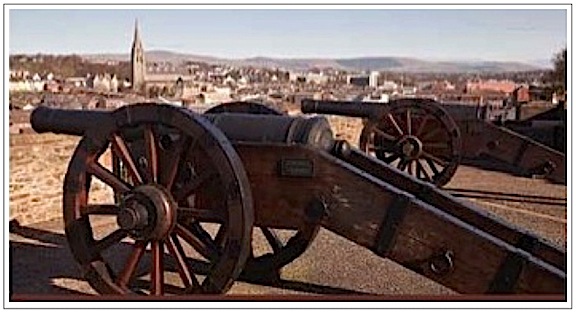 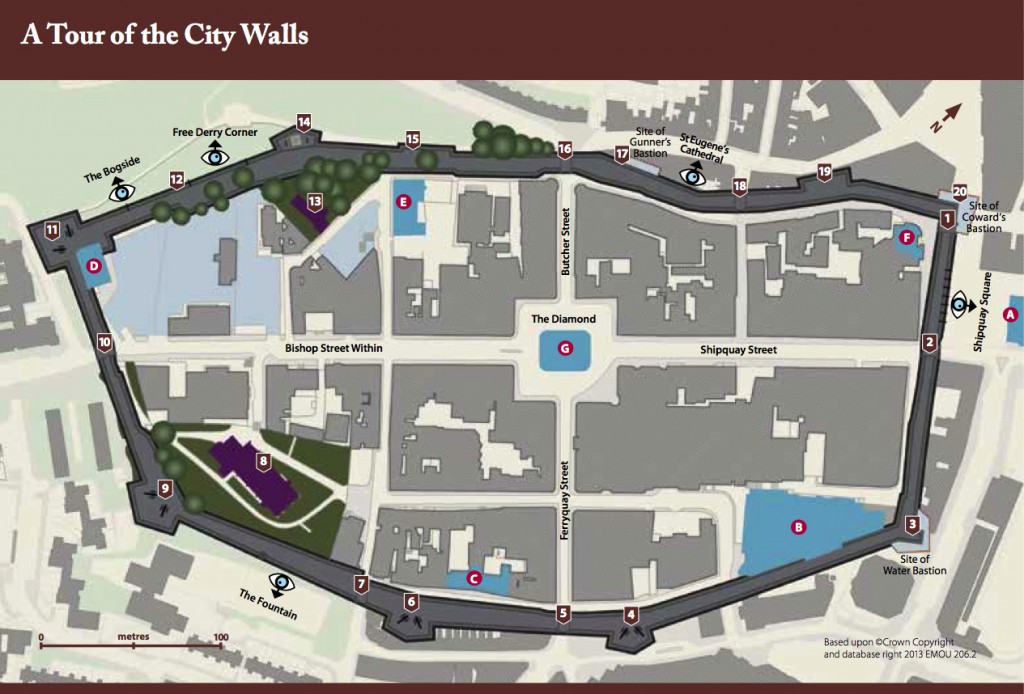 The best way to experience these magnificent 400 year old walls is by taking a stroll along the rampart walkway. To really appreciate them, however, you should also use some of the many access steps or ramps to come down and walk around the walls at ground level. Displayed here are the current names of gates and bastions around the walls, but many of them had earlier names. 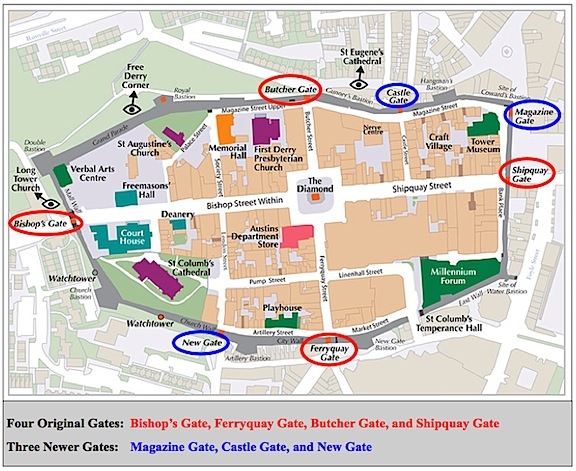 1:  Magazine Gate (one of the three additional gates)
This gate was built in 1865. Recently restored cannon are mounted on replicas of mid- 17th-century block carriages. The two cannon closest to Shipquay Gate bear the Tudor rose-and-crown emblem; one has a date stamp of 1590.

3:  Water Bastion
Most of this bastion was demolished around 1850 and all that now remains is a small platform. Outside the Millennium Forum Theatre is a sculpture by the artist Antony Gormley.

5:  Ferryquay Gate (one of the four original gates)
Ferryquay Gate is located on the site of one of the four original gates. It probably led down to the ferry and later, to the first city bridge. It was this gate that on December 7th 1688 was closed by the 13 apprentices to prevent Jacobite troops entering the city, leading to the siege of 1689. The present gate was built in 1866, and the carved heads represent the Revs. George Walker and James Gordon.

7:  New Gate (one of the three additional gates)
New Gate was first opened in 1787 and was later replaced by the present gate in 1866. 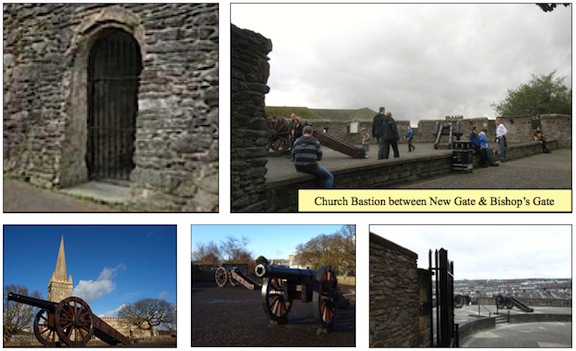 9:  Church Bastion
It was from Church Bastion that King James II was fired upon as he approached the city on April 18th 1689, when the siege began in earnest. In the bastion you can see two demi-culverin cannon. Along the outer wall face is a small gateway, known as a ‘sallyport’. Tradition has it that this gateway was used during the siege, and that it leads into St Columb’s Cathedral.

11:  Double Bastion
The Double Bastion holds two demi-culverin cannons, one of which is the famous Roaring Meg. There is a fine panoramic view over the Bogside and the slopes above, where Jacobite guns were positioned during the 1689 siege.

12:  Grand Parade
The Grand Parade was used as a promenade in the 19th century. The sycamore trees commemorate the 13 apprentices who closed the gates on King James’ soldiers during the 1689 siege: the fruit of the sycamore tree resembles a bunch of keys; symbolic of the locked gates. One of the cannon sent over in 1620 bears a City of London shield.

13:  St. Augustine’s Church
St. Augustine’s Church is locally known as the ‘Wee Church on the Walls’. A neo-Gothic church of 1872, it is built of whinstone with sandstone dressings. It is thought to be the site of St. Columba’s original monastery, founded in 546AD. By 1633, a new cathedral church had been built, and was used by the first settlers from England, Wales and Scotland. It is believed that the cannonball containing the terms for surrender during the Siege 1688-1689 fell in the church graveyard. The present building dates from 1872 and was consecrated by Bishop William Alexander, husband of the famous hymn writer, Frances Cecil Alexander. St. Augustine’s has a history second to none and is the domain of the Anglican Church of Ireland. 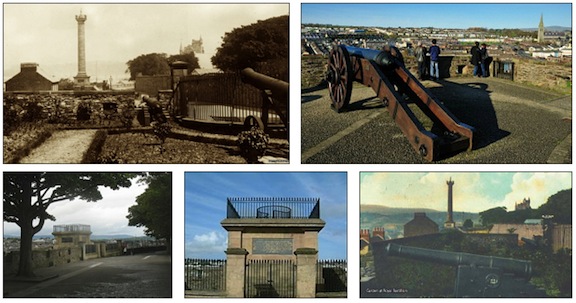 14:  Royal Bastion
The Governor Walker memorial pillar was erected in 1828 to commemorate the shutting of the city gates by the Apprentice Boys of Derry during the 1689 siege. The pillar was surmounted by a statue of the Rev George Walker, Governor of the city throughout the siege. It was blown up in 1973. There are also two late 18th century 6 pounder cannons within the bastion.

15:  The Platform (no photo)
A long rectangular gun platform protrudes out from the walls. Just opposite the Platform stands the Memorial Hall of the Apprentice Boys of Derry, and nearby is First Derry Presbyterian Church, built before 1780 on the site of an earlier church founded in 1690. The pediment was added in 1828.

18:  Castle Gate (one of the three additional gates)
Castle Gate is the smallest and one of the least elaborate of the city’s gates. It was opened through the walls in 1802.

19:  Hangman’s Bastion
Hangman’s Bastion took its name from an incident during the 1689 siege when a man, trying to escape over the walls, got caught in the rope he was using and almost hanged. Further along, the wall kinks outwards, probably to incorporate the late medieval O’Donnell tower house which once stood here.

20:  Coward’s Bastion
At the corner was the last of the bastions, removed during the first half of the 19th century. This area was attacked least during the 1689 siege and so was a popular posting for some members of the garrison, giving the bastion its name.

Other places of interest close to the city walls 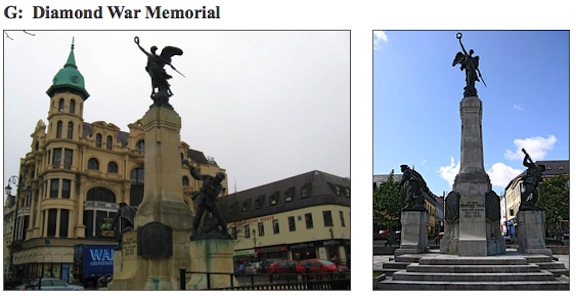