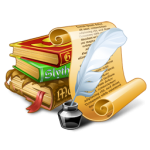 At St. Mary Our Lady of Grace Church on January 19th, , the AOH Pinellas Division 2 Officer Installation began at 2pm.  AOH FL State President Greg Canning drove from Kissimmee, FL to perform the Installation.  Sean Denny was reinstalled as Division President along with Vice President Jim Gillis, Recording Secretary Jim Whelan, Financial Secretary Robert King, Treasurer Charles Rooney, Chairman of Standing Committees Gerard O’Brien, and Marshal Jim Prior.  Sentinel David Prior was not able to attend.  After the ceremony, we went to Mass together.  Pastor Fr. Damian Amantia gave permission to join the procession and thanked the Hibernians for all the work they do.  After Mass, we had dinner together at Courigan’s Irish Pub at Bayfront Towers. 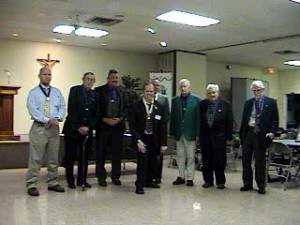 Tom Misener arranged for the AOH and LAOH to have tables at the Florida State Fair in Tampa on February 14th.  Several Hibernians went to a Day Membership Drive at the Event Auditorium.  Jim Gillis brought Charlie Rooney and Jim Prior to the Fair.  State President Greg Canning joined them and brought the State Board Banner, Irish Province Flags, Hurling Sticks, and other Irish Archives.  Organizer Joe LaGuardia, Past LAOH Margot Neuendorf, and some Ladies from Pinellas including Maeve Anderson, Helen Hayden, Maureen Hunt, and Jane McVeigh-McNee also attended.

The AOH has given the task of acquiring Irish American Heritage Month (IAHM) Proclamations from the Heads of all levels of US Government.  In Pinellas County, letters to 25 Mayors were mailed asking for the Proclamations in 2013.  The Cities of Safety Harbor and Pinellas Park mailed the Proclamations.  Pinellas County Commissioners emailed it via State President Canning.  Between February and March 2013, Invitations were from the City of Dunedin (February 21), The City of St. Petersburg (March 14), and The City of Clearwater (March 21) for the AOH and LAOH to receive the IAHM Proclamations in person.  Division President Sean Denny went to Dunedin City Hall on February 21 and joined Maeve Anderson, Robert King, and Jane McVeigh-McNee to receive the IAHM Proclamation on behalf of Irish Americans.  President Denny gave an acceptance speech and met Mayor Dave Eggers. 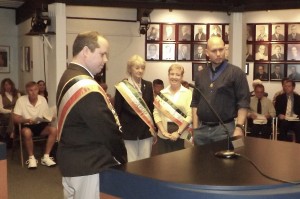 On March 2nd, Robert King and Sean Denny went to the Bay Area Renaissance Fair near the Museum of Science and Industry (MOSI).  They bought a tent and brought AOH Pinellas Division banner.  They spent Saturday afternoon in the Highland Events area.  It was chilly that day especially with an occasional gust of wind.  They got to speak to several people interested in becoming a Hibernian. 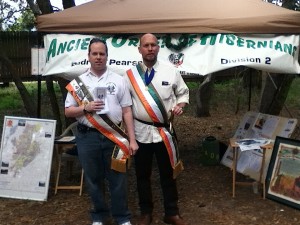 Jim Prior and Jim Gillis attended a Council Meeting at St. Petersburg City Hall on March 14th for receiving an Irish American Heritage Month Proclamation.  After it was Presented by Mayor Bill Foster, Councilwoman Leslie Curran thanked Jim Prior for his work at St. Mary’s and that she went to High School with his Father.  She also said “it was a new day for the Catholic Church with reference to our new Holy Father.  The City of Pasadena sent their Proclamation soon after to President Sean Denny. 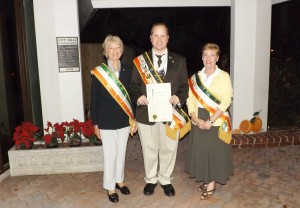 Charlie Rooney, Sean Denny, Jim Gillis, Jim Prior, Rob King, and Margaret Pauly met at St. Mary’s for the 4pm Mass.  AOH Pinellas 2 Chaplain Fr. Mike Perry and Fr. Tony Fortunato concelebrated with Pastor Fr. Damian.  Jim Prior, Charlie Rooney, and Sean Denny brought up the gifts during the Mass.  After communion, Sean Denny went up to speak to the Congregation on what the Ancient Order of Hibernians had done for the community.  They donated a $160 check to Faith Formation under the care of Sam Marable.  We wished everyone a Happy St. Patrick’s Day while the crowd left. 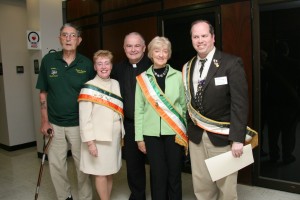 The City of Clearwater invited the AOH/LAOH to receive a Proclamation for Irish American Heritage Month on March 21, 2013.  Sean Denny arrived at Clearwater City Hall before 6pm.  Maeve Anderson, Jane McVeigh-McNee, Jim McNee, and Charles Rooney joined him at the Council Chambers.  Mayor George Cretekos read the Proclamation and presented it.  President Denny gave and acceptance speech and greeted each member of the Council.  Jim McNee snapped some photos with Fr. Madden, Priest from St. Cecilia’s. 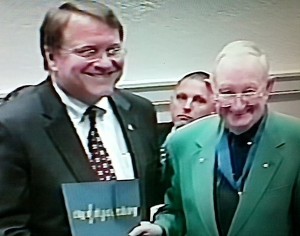 Jane McVeigh-McNee provided the photo.  Other Irish clubs like Top of the World also participated.  Following the Easter Monday Mass, a reception was held at the Largo FOP Hall by the Ladies. 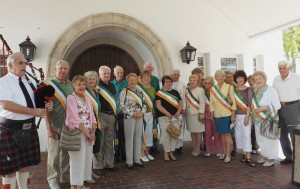 9) State Board Meeting in Maitland, May 8

Members from Pinellas County attended the AOH FL State Board Meeting Spring 2013 on May 4th.  AOH State Charities & Missions Chairman Jim Whelan, AOH Past FL State President and Pinellas President Sean Denny, AOH Pinellas Vice President Jim Gillis, and AOH Pinellas Treasurer Charles Rooney.  It was located in Maitland, just north of Downtown Orlando at the North Orlando Sheraton Hotel.  State VP Rick Hewitt and State President Greg Canning setup the AOH State Banner and a lunch.  There was a nice reunion with former State Treasurer and Editor Peter Shaughnessy whom belonged to Citrus Division 1 and moved to the Villages.  The meeting began after 1pm and lasted for three hours.  AOH FL members celebrated the 177th Anniversary of the AOH in America on this day.  After the meeting, they were given a tour of the Hotel.  The AOH Florida State Board chose this hotel for the Convention Site in October.  They toured the Banquet Halls, an Irish Pub, and a bedroom on the Fifth Floor. 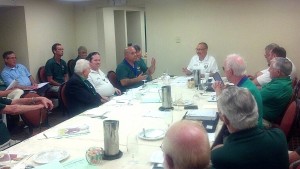