The Blessed Virgin Mary: Her Privileges and Relation to Christ and His Church

by Father William G. Most

According to a late tradition, the parents of Our Lady, the Blessed Virgin Mary, were St. Joachim and St. Anne, natives of Bethlehem who lived in Nazareth. 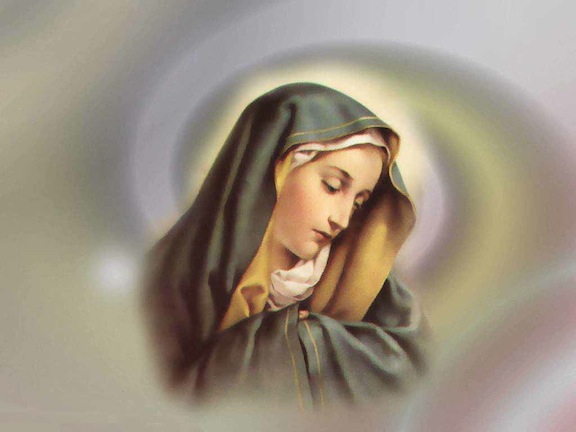 Mary’s most fundamental privilege is that of being the Mother of God. We do not mean she produced the divine nature, of course. But her Son is God, so she is the Mother of God. Similarly, Mrs. Jones shares only in the production of the body of her son John, not at all in the making of his soul. Yet we do not say she is mother of the body of John Jones, but of John Jones, the person. Pius XI quoted St. Thomas Aquinas with approval in saying that “From the fact that she is the Mother of God, she has a sort of infinite dignity from the infinite good that God is. (Lux veritatis, Dec. 25, 1931, citing St. Thomas, Summa Theologiae I. 25. 6. ad 4). 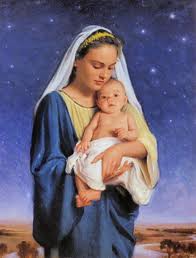 Mary conceived her son by the power of the Holy Spirit (Luke 1:35). The Archangel first told her that her Son was to be the Son of the Most High. However, any devout Jew could be called a son of God. But there was more: the angel told her He would reign over the house of Jacob forever: right then she would know He was to be the Messiah, for Jews then commonly believed the Messiah would reign forever. Finally, the angel said He would be conceived when the Holy Spirit would “overshadow” her. That word, she would know, was the one use to describe the Divine Presence filling the ancient Tabernacle in the desert (Exodus 40:35). Her Son was to be called Son of God “for this reason”. So that He was the Son of God in a unique sense. From this alone she likely knew of His divinity, especially when she would add the words of Isaiah 9:5-6 that the Messiah would be “God the Mighty”. Even though the Jews found that text hard, she, full of grace, would readily grasp it.

So this was a virginal conception, that is, without the intervention of a man. Both Matthew and Luke make this clear. If we believe the Gospels, we will understand that readily. The teaching of the Church, already in the oldest creeds, which call her “ever-virgin,” tells us she remained a virgin during and after His birth. Some have tried to say the teaching on her virginity was not physical, but just a way of expressing her holiness. But it is more than that: Vatican II (Lumen Gentium # 57) wrote that His birth “did not diminish, but consecrated her virginal integrity.” That word “integrity” refers to physical condition.

Therefore when the Gospels speak of the “brothers and sisters” of Jesus, they do not mean other children of Mary. The Hebrew words were very broad, could cover any sort of relationship. For that matter, modern English uses these words even more broadly for members of fraternities and sororities. 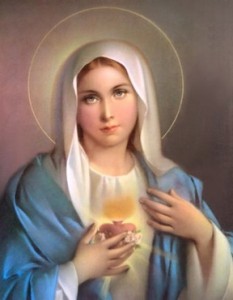 As a result of this Divine Motherhood, because it was fitting for Her Son, she obtained the great grace of the Immaculate Conception, defined by Pius IX in 1854. This means that from the first instant of conception her soul had sanctifying grace, a share in God’s own life, given in anticipation of the future merits of her Son.

The angel’s greeting to Mary is traditionally translated “Hail, full of grace,” but this has been disputed in modern times. Vatican II, Pope John Paul II and others understand the Greek of Luke 1:28, kecharitomene, to mean “full of grace”. The word is a perfect participle, a very strong form. The root verb, charitoo, means to put someone into the state of grace/favor. And especially, the word is used instead of her name, in direct address. This is like saying someone is Mr. Tennis–the ultimate in tennis. So she is Miss Grace, the ultimate in grace. Pius IX, in defining the Immaculate Conception, said that even at the start, her holiness was so great that “none greater under God can be thought of, and no one but God can comprehend it”!

Cooperation in the Redemption

One of the oldest teachings of the Church is that Mary is the New Eve. Just as the first Eve really contributed to the disaster of original sin, so Mary the New Eve really contributed to removing it, that is, to redeeming us. She was Mother of the Redeemer precisely insofar as He is our Redeemer. Every Pope since Leo XIII, and Vatican II, in seventeen documents have said that her role in redeeming us extends even to a part in the great sacrifice of Calvary itself! It is a general principle, that if something is taught repeatedly by the Church, even on a level less than a definition, the teaching is infallible.

Vatican II, echoing earlier papal teaching, tells us that at the cross she was asked even to “consent” to the death of her Son (LG # 58). Pope John Paul II, in his Encyclical, The Mother of the Redeemer, set out to further deepen that teaching (as he tells us in his Guardian of the Redeemer [on St. Joseph]). He showed that this was the “deepest self-emptying in history” for her and her Son. In in it, Mary practiced “the obedience of faith”. Now since all perfection lies in positively willing what God wills whenever we know His positive will, it is clear that Mary was called on to positively will that her Son die, die then, die so horribly. She had to will this in spite of a love for her Son so great that “only God can comprehend it”–for Pius IX had said, as we saw above that her holiness was that great even at the start. But holiness and love of God are interchangeable words. So in willing the death of her Divine Son, it is clear that her suffering was such that “no one but God could comprehend it.”

Mediatrix of All Graces

As we would expect, having shared at immense cost in earning all graces, she shares similarly in distributing all of them as Mediatrix of all graces. This truth too has been taught numerous times by a long series of Popes–every Pope from Leo XIII through John XXIII. 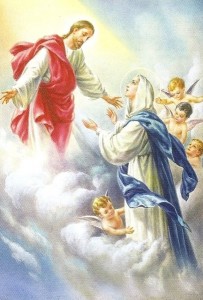 At the end of her earthly life, Mary was taken up (assumed) into heaven, body and soul. Pius XII, in defining the Assumption, explained that “Just as the glorious resurrection of Christ was an essential part and final sign of this victory [over sin and death by Calvary] so that struggle [Calvary] which was common to the Blessed Virgin and her Son, had to be closed by the glorification of her virginal body”. That is, the struggle, a work common to the two was a common cause. It brought Him glorification; it had to bring the same to her. (In all this it is understood she is subordinate to Him, and really depends on Him for all her ability to do anything at all).

As a result, just as He is now King of the Universe, she is Queen of the Universe. “And her kingdom is as vast as that of her Son and God, since nothing is excluded from her dominion” (Pius XII, Bendito seia, May 13, 1946). 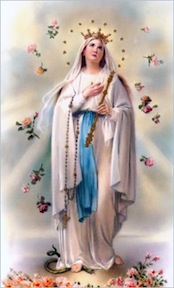 Chapter 8 Vatican II’s Constitution on the Church is entirely on her. In it the Council goes through in detail her association with Him. She is eternally joined with Him in the eternal decree for the Incarnation. She will remain eternally joined to Him as Queen in His Kingdom. And the council went through in detail every one of the mysteries of His life and death, showing in each case her close association with Him. The place the Father gave her is really all-pervading, in His approach to us. In writing this, Vatican II wrote more extensively about her, went farther theologically than all previous Councils combined! In spite of talk that it downgraded her, it was the opposite. Vatican II could really be called the Marian Council.