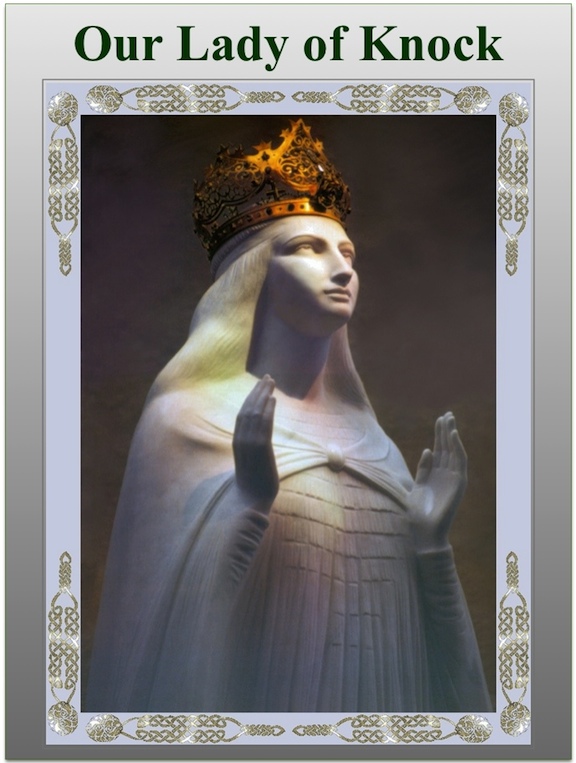 OUR LADY OF KNOCK

Preliminary note:  The image used with added celtic graphics was painted by the eminent artist, Hector Garrido, whose work adorns many a religious greeting card, collector’s plates and art books.  There is scarcely an apparition or event in the life of Mary that he has not painted.  His depiction is officially known as Our Lady of Silence because Our Lady spoke no words at Knock, unlike her other famous apparitions.  The message was in the tableau as related below.

BRIEF ACCOUNT OF THE STORY OF
OUR LADY OF KNOCK, QUEEN OF IRELAND

In the 1870’s, County Mayo suffered great distress.  Famines and economic dislocations produced by forced evictions had created yet another wave of Irish immigration.  It was into this environment that the apparition took place.  Our Lord sending His Mother to visit His oppressed children.

On the wet Thursday evening of August 21, 1879 (at about the hour of 8 o’clock), Our Lady, St. Joseph, and St. John the Evangelist appeared in a blaze of Heavenly light at the south gable of the Church of St. John the Baptist located in Knock, County Mayo.  Behind them and a little to the left of St. John was a plain altar.  On the altar was a Cross and a Lamb with adoring angels.

Mary McLoughlin, the housekeeper to the parish priest of Knock, County Mayo, Ireland, was astonished to see the outside south wall of the church bathed in a mysterious light; there were three figures standing in front of the wall, which she mistook for replacements of the stone figures destroyed in a storm.  She rushed through the rain to her friend Margaret Byrne’s house.

After a half hour Mary decided to leave and Margaret’s sister Mary agreed to walk home with her. As they passed the church they saw and amazing vision very clearly:  Standing out from the gable and to the west of it appeared the Blessed Virgin, St. Joseph and St. John.  The figure of the Blessed Virgin was life-size, while the others seemed to be neither as large nor as tall.  They stood a little away from the gable wall about two feet from the ground.

Saint Joseph, also wearing white robes, stood on the Virgin’s right hand.  His head was bent forward from the shoulders towards the Blessed Virgin.

John the Evangelist (the Apostle) stood to the left of the Blessed Virgin.  He was dressed in a long robe and wore a mitre (a tall headdress worn by bishops and senior abbots as a symbol of office).  He was partly turned away from the other figures. He appeared to be preaching and he held open a large book in his left hand.

To the left of St. John was an altar with a lamb on it with a cross standing on the altar behind the lamb.

Mary Byrne ran to tell her family while Mary McLoughlin gazed at the apparition.  Soon a crowd gathered and all saw the apparition. The parish priest, Archdeacon Cavanaugh, did not come out, however, and his absence was a disappointment to the devout villagers.  Among the witnesses were Patrick Hill and John Curry.  As Patrick later described the scene: “The figures were fully rounded, as if they had a body and life.  They did not speak but, as we drew near, they retreated a little towards the wall.”  Patrick reported that he got close enough to make out the words in the book held by the figure of St. John.

An old woman named Bridget Trench drew closer to embrace the feet of the Virgin, but the figure seemed always beyond reach.  Others out in the fields and some distance away saw a strange light around the church.  The vision lasted for about three hours and then faded.

The witnesses watched the Apparition in pouring rain for two hours, reciting the Rosary.  Although the witnesses standing before the gable were drenched, no rain fell in the direction of the gable.  They felt the ground carefully with their hands and it was perfectly dry as was the gable itself.

When the apparition began there was good light, but although it then became very dark, witnesses could still see the figures very clearly – they appeared to be the color of a bright whitish light.  The apparition did not flicker or move in any way.

People who were not at the apparition site reported that they saw a bright light illuminating the area where the church was.

The next day a group of villagers went to see the priest, who accepted their report as genuine.  This priest wrote to the Archbishop of Tuam, Most Rev. Dr. John MacHale, who established an ecclesiastical commission of inquiry to interview a number of the people claiming to witness the apparition.  The diocesan hierarchy was not convinced, and some members of the commission ridiculed the visionaries, alleging they were victims of a hoax perpetrated by the local Protestant constable!  But the ordinary people were not so skeptical, and the first pilgrimages to Knock began in 1880.  Two years later Archbishop John Joseph Lynch of Toronto made a visit to the parish and claimed he had been healed by the Virgin of Knock.

The Commission’s final verdict was that the testimony of all the witnesses taken as a whole is trustworthy and satisfactory.  In due course many of the witnesses died.  But Mary Byrne married, raised six children, living her entire life in Knock.  At a second Commission of inquiry in 1936, the surviving witnesses, including Mary Byrne at the age of eighty-six, confirmed the evidence they gave to the first Commission.  Mary Byrne’s account did not vary from the first report she gave in 1879.

The growth of railways and the appearance of local and national newspapers fueled interest in the small Mayo village.  Reports of “strange occurrences in a small Irish village” were featured almost immediately in the international media, notably The Times (of London).  Newspapers from as far away as Chicago sent reporters to cover the Knock phenomenon, while Queen Victoria asked her government in Dublin Castle to send her a report about the event.

Since the Apparition first appeared, a number of cures and favors have occurred with visitors to Our Lady of Knock’s Shrine.  Those who claim to have been cured here still leave sticks and crutches at the spot where the apparition is believed to have occurred.  These devices are now on display in the main shrine.

Each Irish diocese makes an annual pilgrimage to the Marian Shrine and the nine-day Knock novena attracts ten thousand pilgrims every August.

The village of Knock was transformed by the thousands who came to commemorate the vision and to ask for healing for others and themselves.  Each year more than a half million visitors arrive to pay their respects to the Blessed Virgin.

The Church finally approved the apparition in 1971 as being quite probable, although it has never been formally stated. The Shrine at Knock is opened year round.

Because the local church was too small to accommodate the crowds, the facility was expended.

Services at the Shrine include — Organized pilgrimages, Daily Masses and Confessions, Anointing of the Sick, Counseling Service, Prayer Guidance and Youth Ministry.  The Shrine is opened year round.

INFORMATION ABOUT THE SHRINE:

LOCATION:  Co. Mayo in NW Republic of Ireland.  Access from London.  Trains and buses to Ballyhaunis [7 miles/11 km] from Dublin and Belfast. 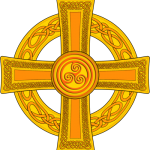 THE HAIL MARY IN GAELIC

PRAYER TO OUR LADY OF KNOCK, IRELAND
Eleventh Century Irish Litany of Mary

Great Mary, Greatest of Marys, Greatest of Women,
Mother of Eternal Glory, Mother of the Golden Light,
Honor of the Sky, Temple of the Divinity, Fountain of the Gardens,
Serene as the Moon, Bright as the Sun, Garden Enclosed,
Temple of the Living God, Light of Nazareth, Beauty of the World,
Queen of Life, Ladder of Heaven, Mother of God.
Pray for us. 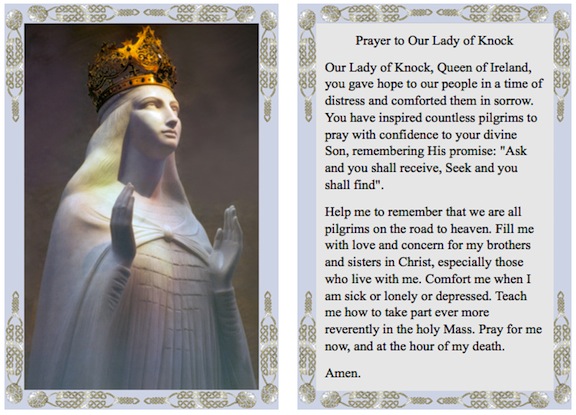 Banner Image:  Plain Without the Frame 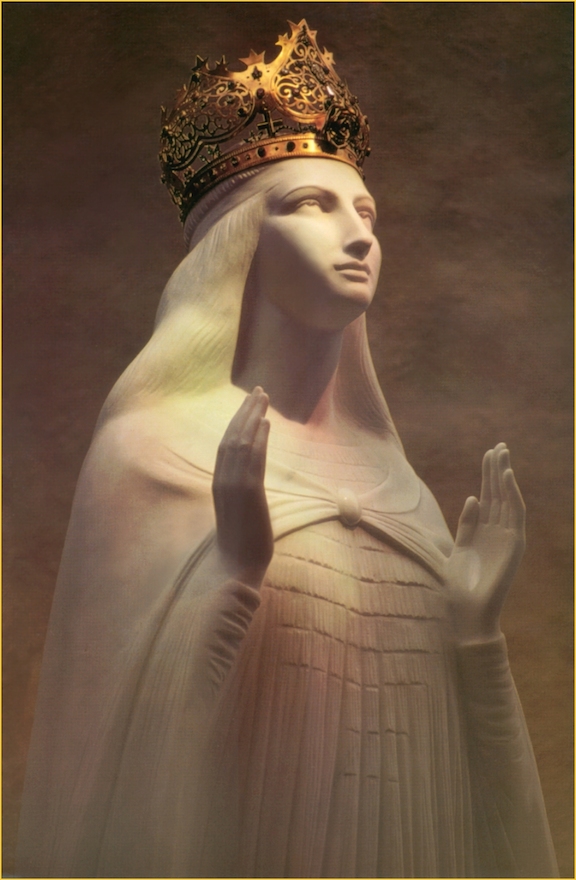 Our Lady of Knock Shrine 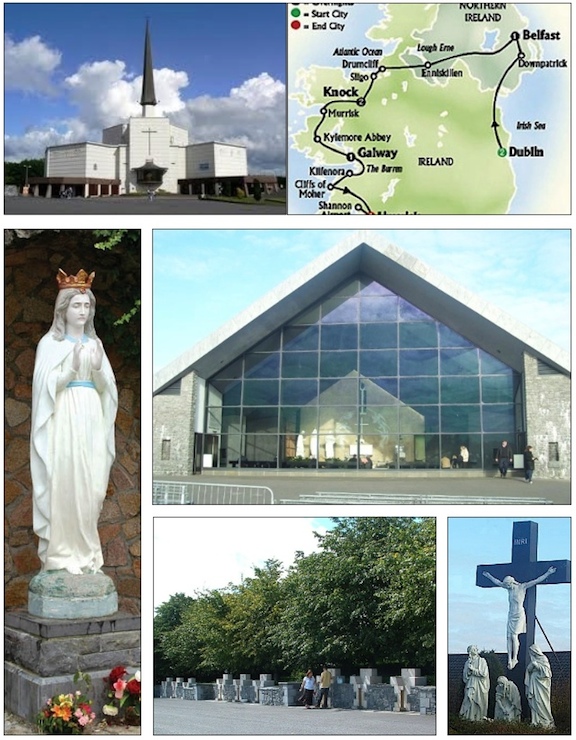 Irish Coastline with an Image of Our Lady of Knock 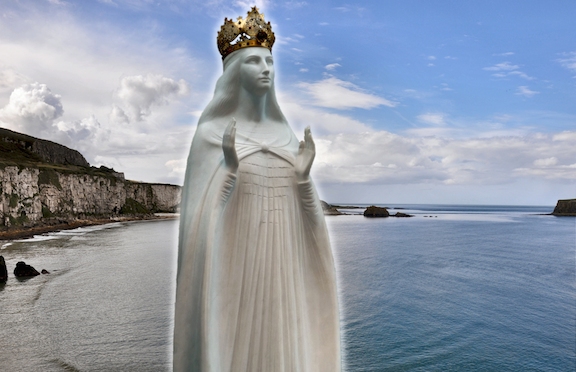 Irish River View with an Image of Our Lady of Knock 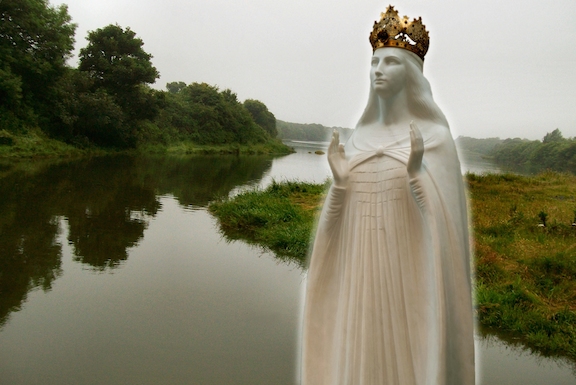 The Main Basilica at the National Shrine of Our Lady of Knock (Knock, Co. Mayo, Ireland) 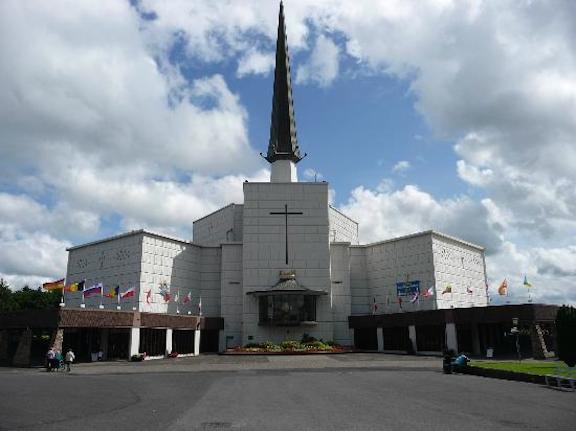 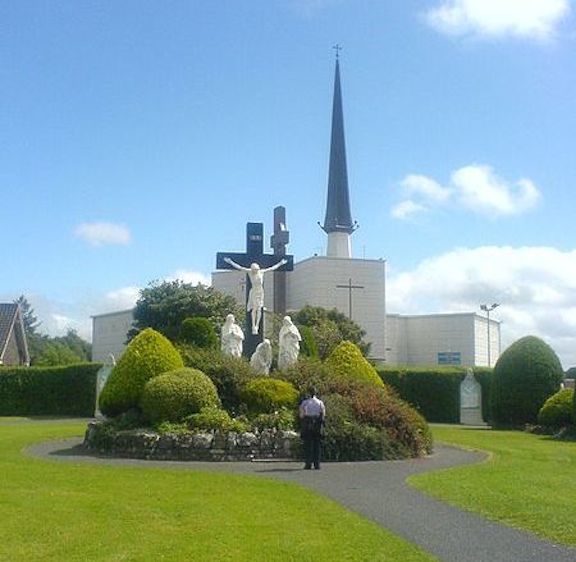 Historical Pictures of Our Lady of Knock Shrine 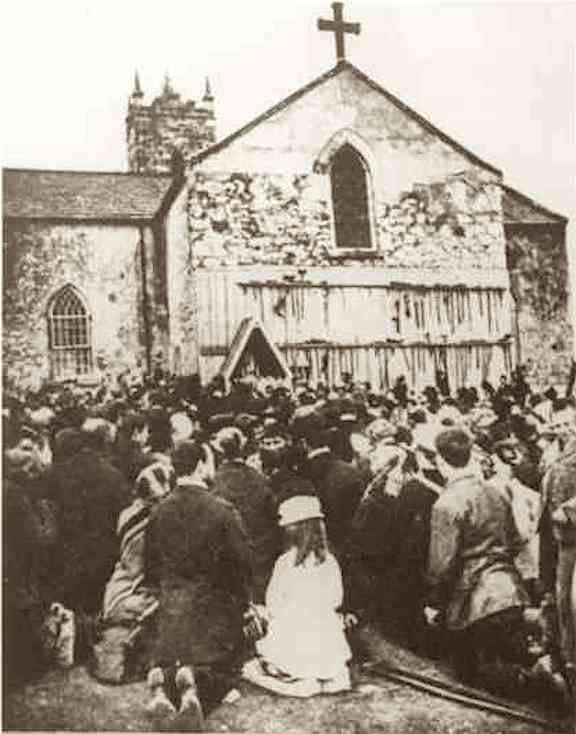 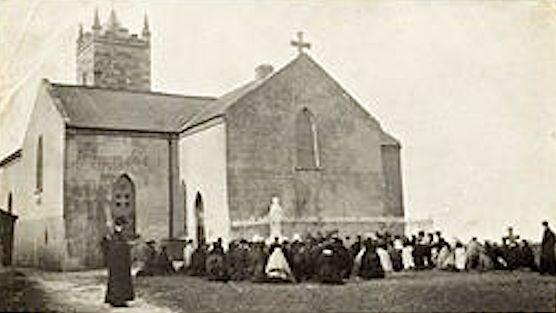 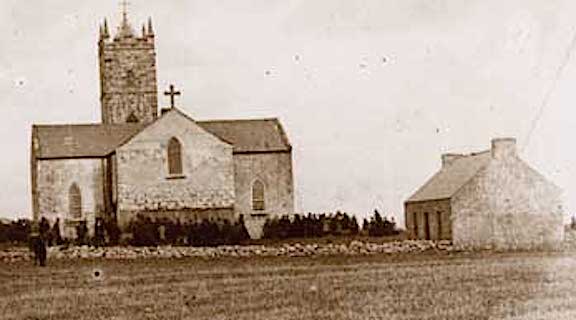 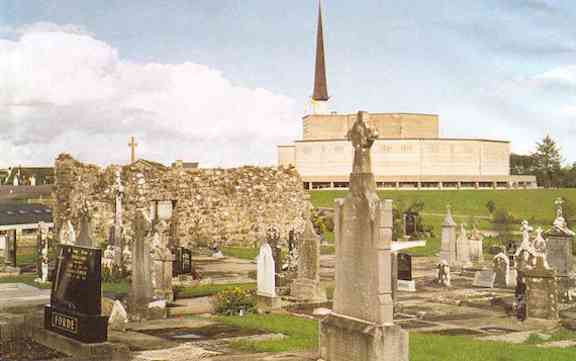 Interior of the Basilica at Knock shrine in County Mayo

Image of the Original Apparition 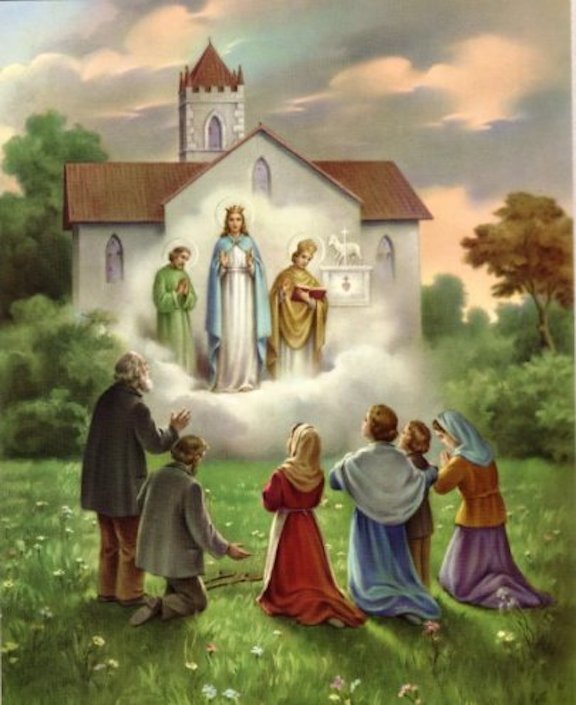 The Marian Shrine on the side Wall of the Original Church (Knock, Co. Mayo, Ireland) 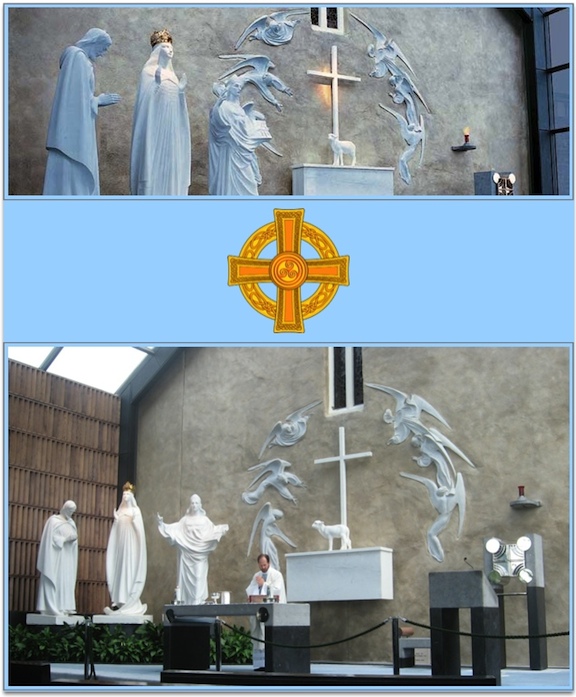 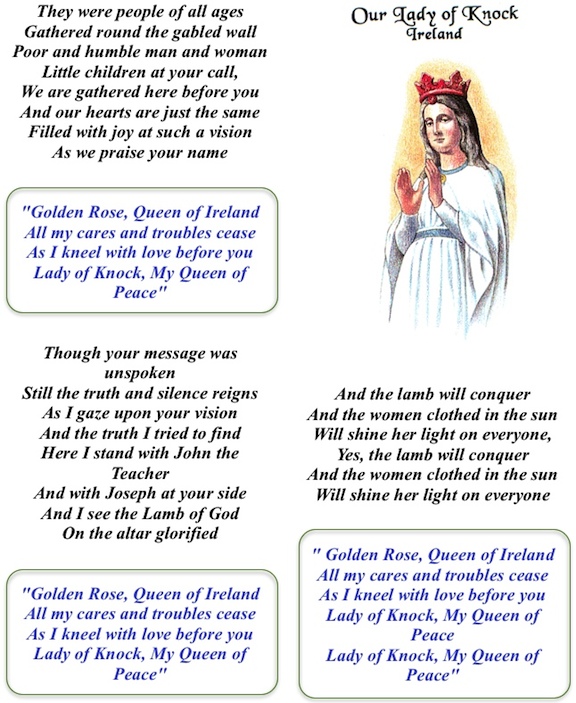