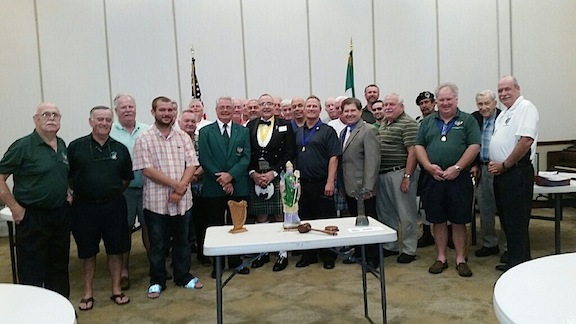 The Division formed on Thursday evening of August 21st, 2014 on the Feast Day of Our Lady of Knock (Queen of Ireland) at St. Bernadette’s Catholic Church Hall in Port St. Lucie. Ray Lynch was elected as the Division’s first President.
State Secretary Francis X. Delaney, State Historian Patrick Ripton, and Greg Seán Canning (Florida State President, National Director, and FFAI Co-Chairman) traveled to Port St. Lucie to install Florida’s 13th Division on the evening of August 21st.  Our new Brothers were first initiated into our Order in their Church hall located at the beautiful church of St. Bernadette.

Their chosen Chaplin began the night with prayer after a Piper marched the State Officers and new members of the Brian Boru Division into the Hall.  Our Sisters of The LAOH, from a nearby town, provided refreshments following the installation.

Prior to the initiation, State President Greg Seán Canning spoke about the history of our Order, the role we play in advocating and defending Holy Church and Mother Country, the importance of education among our people, and the importance and significance of our motto of Friendship, Unity, and Christian Charity.

Following the initiation, State President Greg Seán Canning spoke briefly about the qualifications of officers and their respective responsibilities.  At that point, all non-members of the Division (Brothers from the Martin County Division were present to offer support) were asked to leave to enable the Brothers of the new Division to elect their first slate of officers and choose the name of their Division.  Once those matters were settled, the State President was invited to return to their meeting.  At that point, the new officers were installed and their Division President, Ray Lynch, brought the meeting to an official closing.

Overall, it was a great night for St. Lucie County, for the State of Florida, and for our National AOH Order.

The march for expansion continues as our Southern Organizers are now turning their attention to Indian River County and our State Vice President and our Northern Organizer, Patrick Kennedy, turn their attention to Citrus County.  In the meanwhile, State President Greg Seán Canning will be addressing the Irish American Cultural Society in Orlando in early September for the purpose of initiating interest for an AOH Division in the Orlando Area.