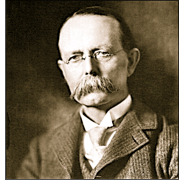 Holland, John Philip (1841-1914), an Irish-American inventor, was mainly responsible for the development of the submarine.  His vessel, the Holland, built in 1898, proved that the submarine was practical.  It provided the model for later submarines. 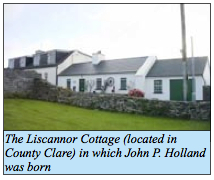 John P. Holland was born on February 24, 1841, in the coastguard’s residence in Liscannor, Co. Clare. Holland attended St. Macreehy’s National School and probably spent some time in the Christian Brothers School in Ennistymon. His father died in the 1840s and the family moved to Limerick in 1853. Holland joined the Christian Brothers in Limerick and taught in Limerick and many other centers in the country.

He began work on the idea of a submarine while teaching school in Ireland from 1858 to 1872.  By 1870, he had completed the first plans for his invention.  He also had an interest in flying and while in Cork with the Christian Brothers he drew up designs of an airplane.

Due to ill health, Holland left the Christian Brothers in 1873.  He came to the United States and joined his two brothers and his mother, who had already emigrated to Boston.  He then settled in Paterson, N.J., where he taught school at St. John’s Catholic School.  During his tenure there, he submitted his submarine plans to the U.S. Navy in 1875, but they were rejected as “a fantastic scheme of a civilian landsman”.  However the Fenian Society, a group of Irish patriots in the United States who hoped to destroy England’s naval power, became interested.  They supported Holland’s experiments and gave him money to build two submarines.  His first boat was tested with mixed results in the Passaic River in 1878.  His second boat, the Fenian Ram, was launched in 1881.  Its success established many basic features of submarines.  Although the Fenian Ram had marked an important stage in submarine development, the Fenians were no longer prepared to back Holland who severed all connections with the organization after that. Indeed, twenty years later he was not slow in selling his designs to the British Navy who launched their own Holland designed sub in October 1901.

In 1888, the U.S. Navy asked Holland to submit submarine plans.  Seven years later, it awarded him a contract to build a ship.  But this vessel failed, largely because the Navy forced Holland to drop many of his ideas.  In order to prove that his ideas were correct, Holland privately built his own submarine and launched it successfully on St. Patrick’s day, 1898, in New York Harbor.  His submarine,

53-foot (16-meter) in length, was powered by a gasoline engine and electric batteries.  It could reach a speed of 6 knots submerged.

Despite inspections and favorable publicity and indeed the recommendation of the then Secretary of the Navy, Theodore Roosevelt, the Government did not buy the submarine.  Holland made some alterations and after a final test in March, 1900, the U.S. Navy bought this ship (its first submarine) and named it the U.S.S. Holland.   The Navy then asked the inventor to build several more ships like it.  Holland’s firm, the Electric Boat Company (now the Electric Boat Division of General Dynamics Corporation), has continued to build most U.S. Navy submarines.  It has also built many submarines for other countries.

Holland resigned from the Electric Boat Company in 1904 and attempted to establish a new firm.  However, legal complications blocked the undertaking.

He quietly withdrew from public life and resumed work on an aircraft design.  Aviation experts have stated that his design would have worked, but he was beaten to the punch by the Wright brothers and abandoned his efforts.

As well as selling his designs to the British Navy, Holland built two submarines for Japan which were used against Russian in the war of 1904-5.  He received the Rising Sun from the Emperor of Japan for his contribution to the Japanese Naval victory. 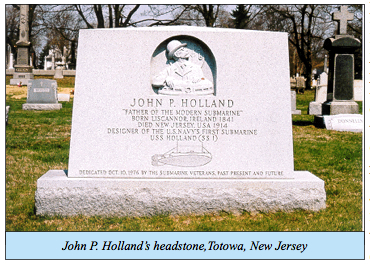 On 12 August 1914, John Holland succumbed to pneumonia. He was 73 years old.  He is buried in Totowa, New Jersey, less than one mile from where he launched his first submarine.  In 1976 his grave was marked with a large headstone.  In 1964 a plaque was erected in liscannor commemorating the 50th anniversary of his death.  Castle Street in liscannor has been renamed Holland Street in his honor.

John Philip Holland’s innovative ideas, designs, and hard work proved that submarines were practical and quite effective in times of war.  His design became the prototype for future submarines and proved to be an important contribution to the development of America’s defense network.