Ireland is a parliamentary democracy.  The National Parliament (Oireachtas) consists of the President and two Houses:  Dáil Éireann (House of Representatives) and Seanad Éireann (the Senate) whose functions and powers derive from the Constitution of Ireland enacted by the People on 1st July, 1937.  The Houses of the Oireachtas are situated at Leinster House, Dublin. 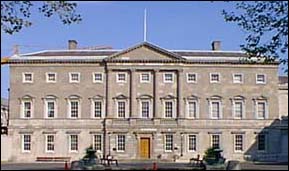 The method of election to each House is different.  The 166 Members of Dáil Éireann are directly elected by the people.  The 60 Members of Seanad Éireann are either nominated or elected as follows:

The Constitution empowers each House to make its own Standing Orders (Rules) with power to attach penalties for their infringement.

The sole and exclusive power of making laws is vested in the Oireachtas subject to the obligations of Community membership as provided for in the Constitution.  The primacy of Dáil Éireann in regard to the life of the Parliament is recognized in that a general election to Seanad Éireann must take place not later than 90 days after the dissolution of the Dáil.  In matters of legislation the Constitution provides that Seanad Éireann cannot delay indefinitely the passage of legislation.  Bills to amend the Constitution and Money Bills i.e. financial legislation, can only be initiated in Dáil Éireann.  Seanad Éireann can make recommendations (but not amendments) to Money Bills and these must be made within 21 days as against 90 days for non-Money Bills.

In addition to its legislative role, each House may examine and criticize Government policy and administration.  However, Dáil Éireann is the House from which the Government (the Executive) is formed and to which it is responsible.   Should the Government fail to retain the support of the majority of the Members of Dáil Éireann, the result can either be the dissolution of the Dáil and a General Election or the formation of a successor Government.

The Houses have complementary powers in certain areas e.g. the removal from office of the President, a judge of the Supreme Court or the High Court and the Comptroller and Auditor General, the declaration and termination of a state of emergency, the making of law and annulment of Statutory Instruments (i.e. delegated legislative power to Ministers).  However, Seanad Éireann does have prior or exclusive powers in two areas:

The President may, after consultation with the Council of State, communicate with the Houses of the Oireachtas by message or address on any matter of national or public importance.

The Houses have separate constitutional identities.  However, in recent years the setting up of a well organised system of Joint Committees (i.e Committees of both Houses sitting and voting together ) has resulted in Members of both Houses having additional opportunities to participate to an even greater extent in specialised parliamentary work in the areas of Foreign Affairs, European Affairs, Irish Language, State Enterprise, Women’s Rights, Family Matters, Sustainable Development and Small Business and Services.

The Ceann Comhairle of  Dáil Éireann and the Cathaoirleach of Seanad Éireann are ex officio members of the Council of State which aids and counsels the President on the exercise and performance by her of certain powers and together with the Chief Justice they constitute the Commission which acts in the event of the absence or temporary or permanent incapacity of the President.

The proceedings of the Houses and parliamentary committees are televised.  The national broadcaster, Radio Telefís Éireann, will broadcast proceedings live on important occasions e.g. Election of the Ceann Comhairle, the Taoiseach and other members of the Government, the Budget Statements, a formal address to the Houses by the President or by visiting Heads of State/Government.  Moreover, RTE will in the course of its news and political coverage of parliamentary business ( including Committees ) make extensive use of the televised proceedings.