A BRIEF HISTORY OF THE AOH IN THE STATE OF FLORIDA

Written by Brother Patrick Moynihan, a long time Brother of our Order and of Brevard Division 2
Edited by Brother Ray Lynch on July 30, 2020

The first persons to call themselves Hibernians in Florida were the members of the Hibernian Regiment of the Spanish Army under the Command of Colonel Arturo O’Neill of County Tyrone who besieged Fort George, drove the British from Pensacola and established Spanish control of Western Florida on the 9th of March 1781. For the next 12 years O’Neill governed Western Florida under Spanish Law. Ninety-five years later the Ancient Order of Hibernians established the first division of the Order in the State of Florida when James D. Redmond became the President of the Jacksonville Division on March 30th 1876. A second division was established in Jacksonville in 1894 and a third division was founded in Pensacola in 1898. No two divisions of the Order were in existence simultaneously in this era and by 1900 there were only 85 Hibernians in Florida; within a very short period all divisions within the State became defunct.

There was a long period of almost three quarters of a century of Hibernian hibernation until the Order was reestablished in Fort Lauderdale, Broward County in 1974 under the guidance of Florida’s only National President, Tom Gilligan, and former State President and National Director, Jim French. Soon thereafter a division was established in Pinellas County. Notwithstanding the fact that no State Board had been established at the time, Florida Hibernians organized and administered a highly successful National Convention in Miami in 1980. The State Board was established a few years later (circa 1983) and Eddie Kalfleish, formerly of New York, was elected as the first State President. A State banner was designed and produced by Ernie Kees of the then fledgling Brevard 2 Division.

Past Florida State President Sean Denny is a native Floridian and the youngest person to hold the office in the State. He was, perhaps, the youngest State President in the nation when he was elected to that office in 2007. He represents an anomaly in that the majority of the membership in Florida is made up of émigrés from the various States drawn to the warmth of the Sunshine State in their retirement years for the full year or as snowbirds for the winter months. Consequently, the attrition and mortality rates are high and divisions of the Order in Florida prosper and wane in accord with the movements and health of its members. Therefore, the State has lost divisions in Brevard, Indian River and St. John’s Counties. New divisions, however, have been added over the past few years with the help of our State Organizers and senior members. The current divisions in the order of their seniority are described in the following section.

CURRENT FLORIDA DIVISIONS IN THE ORDER OF THEIR SENIORITY

Pasco County: William G. Hulton Division 1.   Named for its first President, the Division received its charter on March 17th, 1982. The home division of Past State President Joe LaGuardia received the National Award for Charities at the New Orleans Convention in 2008.

Pinellas County: Padraic Pearse Division 2.   Named for the Irish Patriot, the Division was installed on December10th, 1995. The home division of Past State President Seán Denny it best known for it scholarship and charities programs.

* The MacBride Law was passed in Florida in 1988 (res #S.121.153.F.S.) and strongly endorsed passage of the Good Friday Agreement. The MacBride Principles provide anti-discrimination restrictions on investments in institutions doing business in Northern Ireland. Senator Sanderson pre-filed her repeal-Bill (Senate Bill 1160) on January 14, 2002. She promptly withdrew it upon strong opposition from the Irish National Caucus and numerous legislators and groups on January 22, 2002.

*  In March 2012, permission from the National Office of Vice-President Brendan Moore and Degree Chairman Patrick Shannon was granted for the formation of a Florida Major Degree Team.  This endeavor remains in its earliest stages of development under the guidance of Brothers James Cahill, Greg Seán Canning, and Dennis McKenna.

*  On May 3 of 2013, the Florida Senate passed a resolution (sponsored by Senator Simmons) supporting the efforts of the Irish people to arrive at a peaceful solution on the question of reunification. 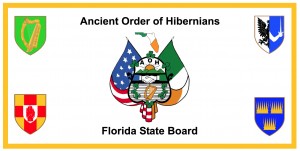