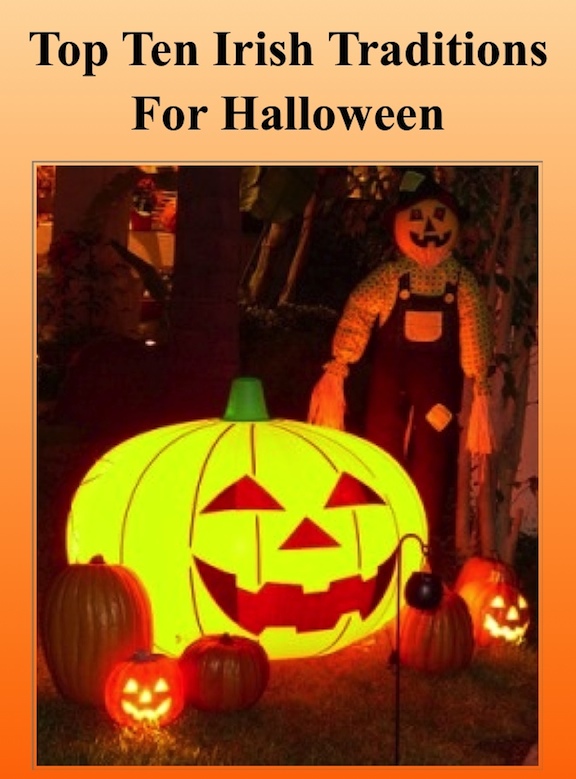 The celebration of Halloween began in Ireland in about 1000 AD so its no wonder that there are so many Irish Halloween traditions that continue around the world every year.

Back then Halloween was a pagan festival called “Samhain” meaning “Summer’s End”. The Celts believed that on the eve of Halloween dead spirits would visit the mortal world. They lit bonfires to keep evil spirits away and dressed in disguises.

Although our Halloween is less about dead spirits and more about having fun and dressing up there are some traditional aspects of an Irish Halloween that continue to this day.

Here’s list of some ancient and some more recent traditions from Ireland that have stuck over the years: 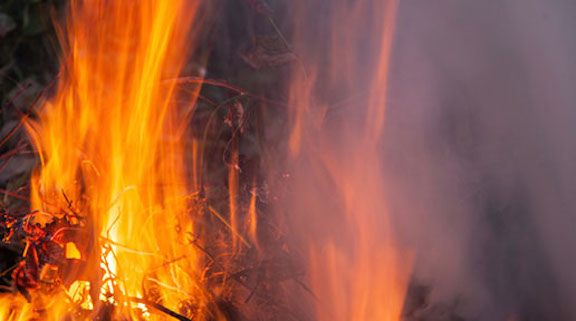 Samhain was seen as the end of summer but also the beginning of another year. It was also the one day of the year when spirits could walk the earth. The community would gather together and light huge fires to ward off bad fortune for the coming year and any evil spirits.

Some believe that people extinguished their fires in the hearth at home before they left and would reignite them using an ember from the bonfire, for good luck. The day after the bonfire the ashes were spread across the fields to further ward off bad luck for the farmers during the year.

It was also traditionally believed that the bonfire encourages dreams especially of your future husband or wife. It was said that if you drop a cutting of your hair into the embers of the fire, the identity of your first husband would be revealed. 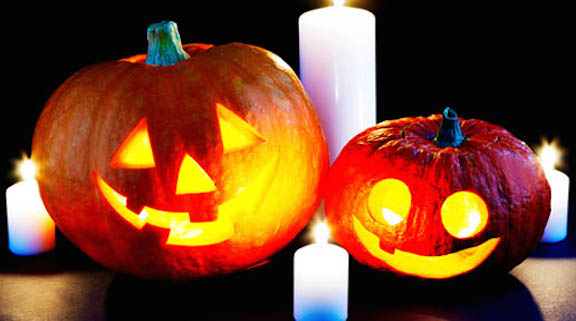 There are two schools of thought on why the Irish carried Jack-o-lantern. One is that the tradition is an ancient Celtic tradition. In order to carry home an ember from the communal bonfire the people would hollow out a turnip so they could walk home with the fire still burning.

The other version is a little more spooky. The other story is that Jack-o-lanterns date back to the 18th century. It is named after an Irish blacksmith, called Jack, who colluded with the Devil and was denied entry into Heaven. Jack was condemned to walk the earth for eternity but asked the Devil for some light. He was given a burning coal which burnt into a turnip that he had hollowed out. Some Irish believe that hanging a lantern in their front window would keep Jack’s wandering soul away.

When the Scot-Irish emigrated to America in they adapted the tradition and used a pumpkin instead as it is more difficult to find turnips. 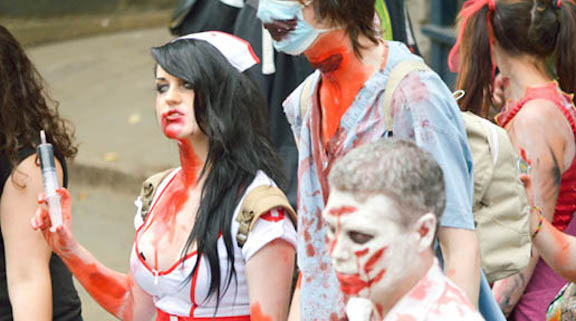 The community would gather around the bonfire and many would be dressed up in elaborate animal skins and heads.

The idea was that the evil spirits would be scared off by the fires. Then if the spirits happened to be wandering the earth and bumped into one of the Celts they might think they were spirits themselves, because of their disguises, and let them go free. This is where our tradition of dressing up comes from. 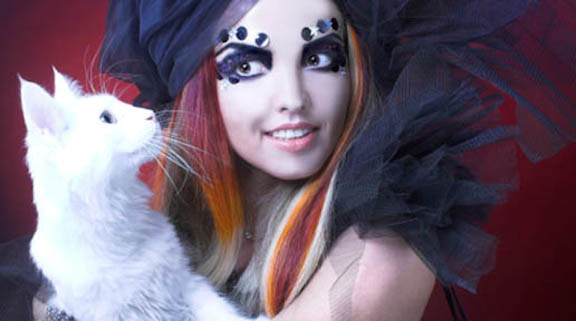 Fairies and goblins collect souls as they travel the earth on Halloween night! The story goes that if you threw dust from under your feet at the fairy they would release any souls they kept captive. However over the years this legend has changed.

Farm animals would be anointed with holy water to keep them safe through the night. If animals showed ill health on Halloween they would be spat at to try to ward off the evil spirits.Trick or Treat

Trick or treat originated centuries ago. In Ireland the poor would go from door to door at rich peoples homes and ask for food, kindling or money.

They would then use what they collected for their celebrations on Halloween and All Saints Day.

They brought these traditions to the United States from 1847 to 1849 during the Great Hunger. 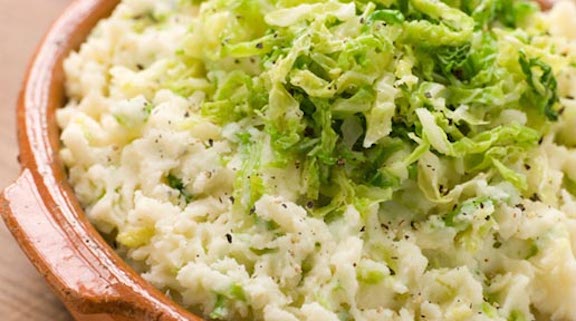 This is the traditional dinner to have on Halloween night before you head out for an evening of fun and mischief. It is a simple dish made with boiled potatoes, curly kale (a type of cabbage) and raw onions.

Traditionally coins were wrapped in pieces of clean paper and slipped into children’s colcannon for them to find and keep. Sometimes people also hide a ring in the colcannon. Whoever finds the ring will be married within the year.

Cook potatoes in a pot of boiling water until tender. Drain, reserving water.

Place the hot potatoes in a large bowl.

Add chopped cabbage to the reserved potato water. Cook 6-8 minutes or until tender.

Meanwhile, fry the onions in the butter or margarine.

When they are cool enough to handle, mash potatoes with a hand masher or fork. Add the fried onions and cabbage.

Add milk, salt and pepper and beat until fluffy.

(From the Irish name Bairín Breac) 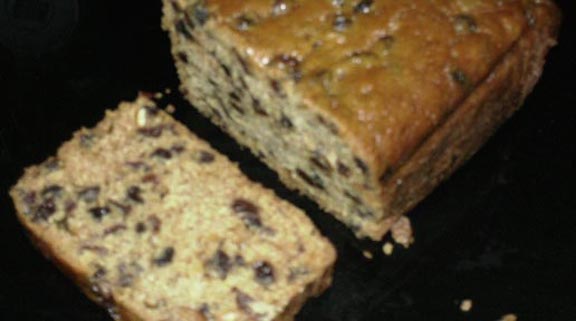 This is a traditional Irish Halloween cake which essentially is a sweet bread with fruit through it as well as some other treats.

Shop-bought barnbracks still contain a ring. But if you make it at home and add your own treats it’s even more fun. Each member of the family gets a slice and each prize has different meaning.

The rag – your financial future is doubtful

The coin – you will have a prosperous year

Soak the dried fruit in the hot tea for 2 hours, then drain and gently squeeze out excess tea.

Beat the egg, sugar, marmalade, orange zest, and tea-soaked fruit until well combined. Gently fold in the flour until just combined, then pour into the prepared Bundt pan.

Bake in preheated oven for 1 hour or until the top of the cake springs back when lightly pressed. Allow to cool in the pan for 2 hours before removing. Continue to cool to room temperature on a wire rack. Press the objects of choice into the cake through the bottom before serving.Snap Apple

There are many games that are played on Halloween night and snap apple or bobbing for apples is one of them.

An apple is suspended from a string and the children are blindfolded and their arms tied behind their backs. The first child to get a decent bit of the apple gets a prize. Bobbing for apples is when some apples are dropped into a basin of water and the children have to go in head first and try to get a bite.

The apples are associated with love and fertility. It is said that whoever gets the first bite will be first to marry. It was also thought that if the girls put the apple they bit, while bobbing, under their pillow that night, they would dream of their future lover.

This old game was particularly popular in County Meath.

A pile of ash was put down in the shape of a cone with a piece of wood sticking out of the top. Then each player takes turns trying to digger the largest amount of ash without the pile collapsing.

All the while competitors chant:

“Shave the poor Friar to make him a liar;

Cut off his beard to make him afeard;

If the Friar will fall, my poor back pays for all!” 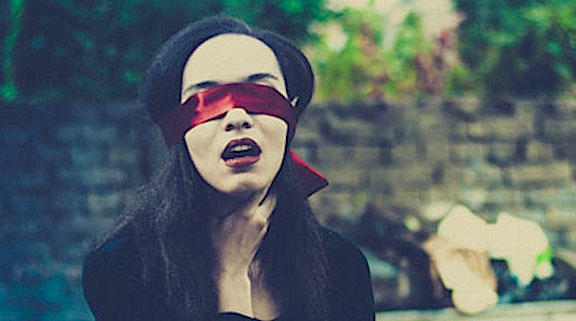 Blind folded local girls would go out into the field and pull up the first cabbage they stumbled upon.

If the cabbage had a lot of clay attached to the roots their future lover would have money.

If the girl ate the cabbage the nature of their future husband would be revealed, bitter or sweet. 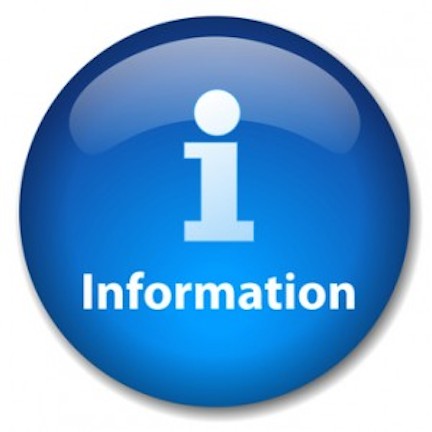