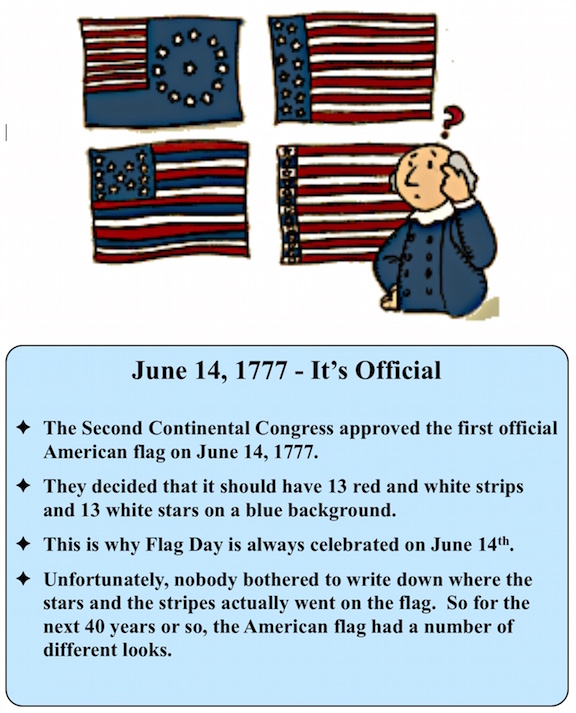 June 14th is a special day for us in America. It is a day set aside to honor our national emblem – the stars and stripes. It is flag day, a day when we should all be flying our flag, but just why is it flag day, what does it mean, and what is our flag anyway that it should have a day of its own.  Well, in terms of material it is only a piece of cloth, dyed with a little blue and red that makes a design. And that may be all that it is to those who show it no respect, to those who make clothing from it, to those who have the audacity to burn it.  But that piece of cloth is much more than material. Its more than a symbol, it’s an emotion; it’s a frame of mind. For you see the design on that banner wasn’t simply selected because it was the most attractive; there is a story in that flag.

In British North America, each of the 13 colonies had its own banner. When they dared to unify and challenge the Crown for their liberty, they sought a banner that would represent that unity and freedom. On June 14, 1777, the Continental Congress enacted a resolution that the flag of these United States be 13 stripes alternating white and red to represent the purity of their new nation and the blood spilled to win it. In the corner would be 13 stars on a field of blue to represent a new constellation in the heavens – it was to be called the United States of America. Later, when the country began to grow, the flag grew as well. In 1794, when Vermont and Kentucky entered the Union, two more stars and two more stripes were added, but Congress later ordered the stripes restored to 13 as a reminder of the 13 original colonies, and allowed that only a star would be added for each new state.

That’s how it was born, but the real story is in how it grew up. It had a few Irish godfathers to guide it through a violent youth.  The first to carry it into battle was Commodore John Barry, the Irish-born father of the American Navy; it was also carried by General William Thompson of Co Meath, who became the first commissioned officer in the new U.S. Army, and scores of others who gave their lives that it might fly unchallenged over a free nation.  But those who gave their lives, didn’t give it for a piece of cloth, they gave it for an ideal. They gave it so that new constellation would not disappear, for that flag was a symbol of freedom not a race of people like other countries flags; it represented unity rather than an ethnic group, it represented an idea instead of a nationality – it was for everybody. And in that respect, it was the first of its kind and everybody in America supported it, whether their heritage was Jewish, Italian, Polish, Greek, German, or Irish. But, it held a special place in the hearts of the Irish for it represented all they had ever hoped to achieve, but were denied in their own land.  Like Barry and Thompson in the American Revolution, they felt an emotion for this noble emblem, and came to its aid at every call.  In the War of 1812, the British had to be reminded that our United States was not just a temporary union, and they ran from its colors in the final battle of that war at New Orleans where it was carried by General Andrew Jackson, the son of Co Antrim immigrants.

When a great civil war threatened to tear it in half, among the Americans who rallied to its protection were Thomas Francis Meagher and the famed Irish Brigade who left many a son of Erin on the battlefield so that the stars and stripes might not fall. The 69th Regiment of that Brigade proudly claims that they never lost their flag in battle, but they came close at Fredericksburg when their flag bearer was found dead with the bare flagpole lying beside him.  Upon removing his jacket they found the flag protectively folded beneath his jacket – a bullet through it and his heart.  Since that day, it has been carried by the fighting 69th through two world wars and military actions to this day in Iraq where the dangerous road between the airport and the Green Zone was named Route Irish in their honor.  Over time, it led many an Irish heart to victory for his adopted land, and there is a fair measure of Irish blood in the red of its stripes.  Besides flying victorious in battle, it has also draped the coffins of America’s heroes – from foot soldiers to Presidents. It has a grand and glorious history that star-spangled banner of ours, and I daresay there’s not another one that can match it. It is a proud ensign that bows to the flag of no other nation on earth.  And that tradition was started by an Irishman at the 1908 Olympics during the opening parade when the flags of all nations were dipping to the King of England as they passed the Royal Box.  American Olympian Martin Sheridan of Mayo whispered to the flag-bearer, “dip that flag and you’ll be in hospital tonight!”  Since that day it has dipped to no earthly king.  The only time it can legitimately be lowered is in honor of a deceased American.  Yet, there are five locations where even that cannot happen – even upon the death of a President.  Under no circumstances is the flag ever lowered over the Betsy Ross House in Philadelphia – its reputed birthplace – over the national memorials of the Alamo, the U.S.S. Arizona at Pearl Harbor, and the tomb of the Unknown Soldier, and the last one, probably because no one can reach it, is the American flag planted on the moon.

There has been much praise written for that grand old ensign of ours, and it is fitting that it’s most memorable praise came with an Irish flavor.  When Francis Scott Key wrote the Star Spangled Banner, the tune used was an ancient melody; it was a planxty written by the legendary Irish harpist Turlough O’Carolan.  And it was never praised with more respect than by one of America’s favorite Irish-American sons — George M Cohan.  Call it what you will, the Star-Spangled Banner, Old Glory, the Stars and Stripes, or the Grand Old Flag; June 14th is our flag’s birthday. Long may it wave!