A native of Drum, Athlone, in County Roscommon Ireland, Father Coyle was ordained in Rome on May 30, 1896 when he was only twenty-three years old. Later that same year, he came to serve his priestly life in the state of Alabama.

Father Coyle arrived in Birmingham shortly before a wave of anti-Catholicism flooded the country, and the revived Ku Klux Klan (KKK) rebranded itself as a “patriotic” fraternity, targeting blacks, Catholics, Jews and foreigners.

It was a tense time in America, and fear of the new immigrants gripped more than a small band of hysterics. A number of states passed “convent inspection laws,” which authorized the warrantless search of convents, monasteries and even Catholic hospitals. Investigators looked for Protestant women and children purportedly being held against their will and for weapons and ammunition the Knights of Columbus had supposedly stashed there.
Knights were plotting an insurrection, the fear-mongers said. They were the pope’s secret foot soldiers and could never be “true Americans.”

Against these baseless accusations, Father Coyle defended the faith and the Order, becoming a lightning rod for attacks. He served faithfully, in what was then the Diocese of Mobile, Alabama, under Bishop Edward Allen. First, Father Coyle served eight years in the Mobile area, initially in parish missions, then at McGill Institute for Boys, first as Instructor and later as Rector of the school. While in Mobile, Father Coyle became a Charter member of Mobile Council 666 of the Knights of Columbus.

In 1904 Bishop Allen appointed Father Coyle as Pastor of St. Paul’s Catholic Church in Birmingham, Alabama, the state’s young but largest city and a major steel-making center of the United States. The need for workers in the area mills and mines brought thousands of men to Birmingham from European countries, a large percentage of whom were Catholic.

Father Coyle served as Pastor of the large St. Paul’s congregation for seventeen years until his tragic death in 1921. He brought a dynamic and apostolic spirit to the parish, emphasizing faithful attendance at Sunday Mass and love of the Eucharist and the Blessed Mother. Among his duties, he served as Chaplain of Birmingham Council 635 of the Knights of Columbus.

During the last years Father Coyle served in Birmingham, there existed a regrettable atmosphere of public anti-Catholic economic and psychological persecution organized and promoted by the Ku Klux Klan and a secret anti-catholic political society called the True Americans. Father Coyle was courageous and unwavering during this tense and threatening period for Catholics in publicly defending the Church and what Catholics believe.Federal agents warned Bishop Edward Allen of Mobile, Ala., of threats against Father Coyle’s life and of plans to burn his church to the ground. Then, on Aug. 11, 1921, Rev. Edwin R. Stephenson, a Methodist minister and Klansman, stepped onto the porch of St. Paul’s rectory with a loaded handgun. About an hour earlier, Father Coyle had officiated the wedding of Rev. Stephenson’s 18-year-old daughter, Ruth, to Pedro Gussman, a Catholic migrant from Puerto Rico. Like many other Klansmen,  Rev. Stephenson despised Catholics. When he learned that Father Coyle had married his daughter to Gussman, he was livid. He shot the priest in cold blood as Father Coyle sat in the swing on his rectory front porch. He died forty minutes later in the operating room at St. Vincent’s Hospital. His funeral was one of the largest ever held in the history of Birmingham. 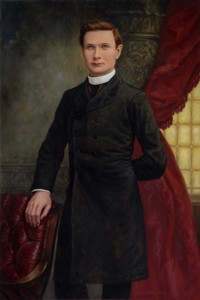 The climate for bringing Rev. Stephenson to justice could not have been worse. A veteran prosecutor spent weeks trying to convince a grand jury to return an indictment, and when it finally did, the Klan ran a statewide drive to raise funds to hire a young lawyer named Hugo Black to lead Rev. Stephenson’s defense. Black would later be elected to the U.S. Senate and appointed to the U.S. Supreme Court.

The Klan’s presence at Rev. Stephenson’s October 1921 trial was manifest. Historians would later report that the jury foreman and the presiding judge were both Klansmen. Hugo Black himself would join the ranks of the KKK less than two years later to forward his own political aspirations.

On the eve of trial, Rev. Stephenson’s lawyers announced they would amend his plea to “not guilty by reason of insanity” to permit the argument that Rev. Stephenson was not responsible for his actions after he learned Father Coyle had married Ruth to Pedro. The minister and his wife both claimed that “the Catholics” had tried to seduce Ruth away from her Protestant faith; news of their daughter’s marriage was the last straw.

Though little remembered today, Rev. Stephenson’s weeklong trial was a national sensation. Reporters from far-flung cities raced to Birmingham to observe the spectacle. The jury, however, took only a few hours to return their verdict: “Not guilty.” The trial was a travesty of justice.

Catholics in Birmingham have never forgotten the outrage. “It is our hope that the sharing of the life and death of this holy man may promote greater understanding, reconciliation and peace among all of God’s children,” writes James Pinto Jr., a member of Father James E. Coyle Council 9862 and an organizer for the Father James E. Coyle Memorial Project.

Father Coyle is buried at Elmwood Cemetery in Birmingham, a ten-foot high Celtic cross marking his resting place. Plans are underway to re-inter his body near the Cathedral of St. Paul in downtown Birmingham. He remains, today, a model of faithful and courageous priestly service. 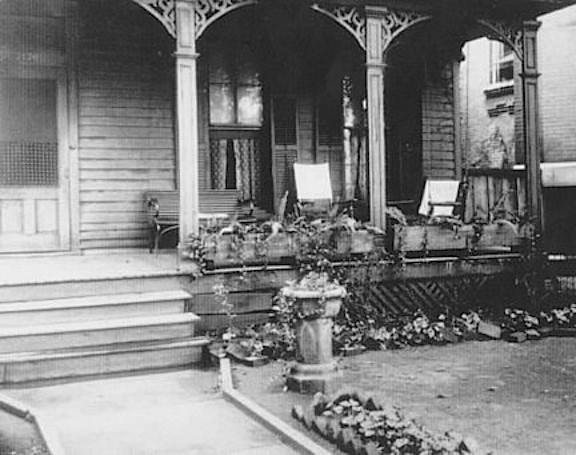 The wood-frame rectory next to St. Paul’s Cathedral, where Father Coyle was murdered.  It was later replaced by the current brick rectory. 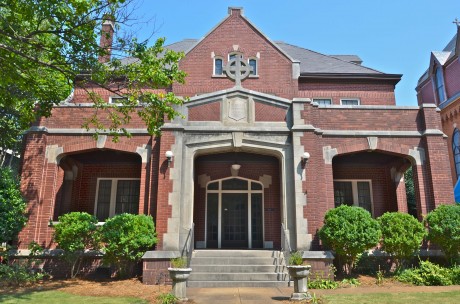 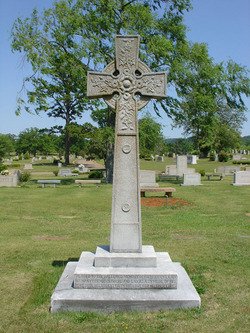 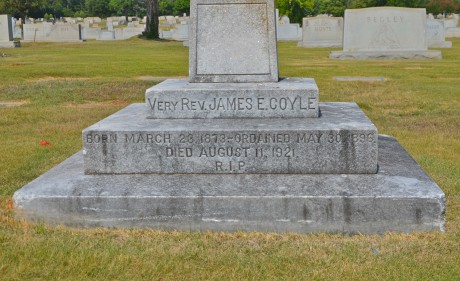 The grave of Father James E. Coyle, murdered in 1921 by a Klansman.  Photo by David.  It Reads: 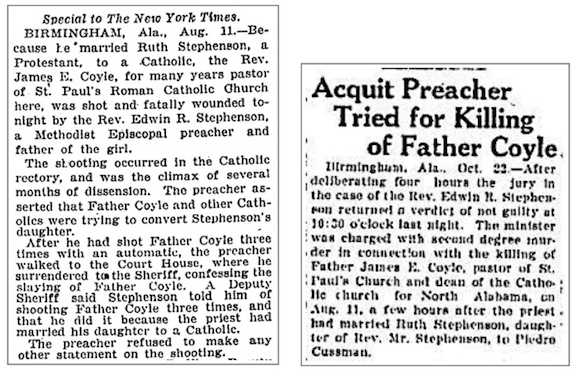 Rev. Edwin R. Stephenson, a Methodist Episcopal preacher, shot and killed Catholic priest Rev. James Coyle on August 11, 1921, in Birmingham, Alabama.  When he surrendered, he refused to apologize for the murder.  Two months later, he was acquitted of the murder in an Alabama Court.  The trial was a travesty of justice.  Prior to the trial, Edwin Stephenson often expressed the wish to see the “Whole Catholic Institution in Hell”.