The Monastery of Clonmacnoise 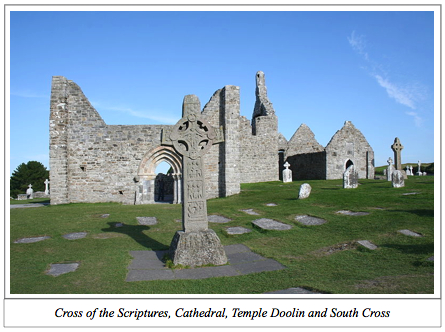 The monastery of Clonmacnoise (meaning “Meadow of the Sons of Nós”) is situated in County Offaly, Ireland on the River Shannon south of Athlone.

Clonmacnoise was founded in 546 by Ciarán, a young man from Rathcroghan, Co. Roscommon. Until the 9th century it had close associations with the kings of Connacht. The strategic location of the monastery helped it become a major center of religion, learning, craftsmanship, and trade by the 9th century and together with Clonard it was the most famous in Ireland, visited by scholars from all over Europe. From the ninth until the eleventh century it was allied with the kings of Meath. Many of the high kings of Tara and Connacht were buried here.

Shortly after his arrival with seven companions, Saint Ciarán met Diarmait Uí Cerbaill who helped him build the first church at the site. This was a small wooden structure and the first of many small churches to be clustered on the site. Diarmuid was to be the first man to be crowned High King of Ireland while a practicing Christian. Ciarán died less than one year later of yellow fever (Justinian Plague) and was reportedly buried under the original wooden church, now the site of the 9th century stone oratory, Temple Ciarán. Annals record that he died at the age of 33, one of the many coincidences recorded between Ciarán’s life and that of Jesus Christ. 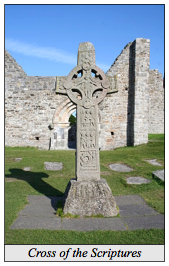 Clonmacnoise’s period of greatest growth came between the 8th and 12th centuries. It was attacked frequently during these four centuries, mostly by the Irish (at least 27 times), the Vikings (at least 7 times) and Anglo-Normans (at least 6 times). The early wooden buildings began to be replaced by more durable stone structures in the 9th century, and the original population of fewer than ten men

grew to perhaps 1,500 to 2,000 by the 11th century. Artisans associated with the site created some of the most beautiful and enduring artworks in metal and stone ever seen in Ireland, with the Clonmacnoise Crozier (on display in the National Museum of Ireland) and the Cross of the Scriptures representing the apex of their efforts.  The National Museum is located in Dublin and in Turlough Park, County Mayo.

In the 12th century Clonmacnoise began to decline. The reasons were varied, but without doubt the most debilitating factor was the growth of the town of Athlone to the north of the site. Athlone became the main trading town for the midlands of Ireland, the most popular route for crossing the Shannon, as well as the best-defended settlement in the region. People migrated north from Clonmacnoise to Athlone, and with the fall in population went much of the support that the site needed to survive. Former allies began to recognize the decline in the site’s influence.

The influx of continental religious orders such as the Franciscans, Augustinians, Benedictines, Cluniacs, etc. around the same time fed into this decline as numerous competing sites began to crop up. Ireland’s move from a monastic framework to a diocesan one in the twelfth century similarly diminished the site’s religious standing, as it was designated the seat of a small and impoverished diocese.

Clonmacnoise was visited by Pope John Paul II in 1979. The site is accessible during the summer season from the River Shannon with trips from Shannonbridge and Athlone. Some private operators also offer bus connections from Athlone, but the most common way to visit the site by car or taxi. 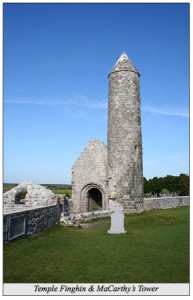 Located in the heart of Ireland at what once was a major crossroads where the north/south route of the River Shannon crossed the east/west route through Ireland’s bogs, Clonmacnoise was a major center of religion, learning and trade.  Today you’ll find extensive remains of churches and temples, three high crosses, two round towers and even castle ruins just outside the grounds.   Most of the site has undergone comprehensive conservation works.  There is also a museum on the grounds highlighting important dates and events that have occurred there.

Temple Connor: Church used by the Church of Ireland since the 18th century.
The Church underwent significant restoration works in the second decade of the 20th century, when the pitch of the roof was raised and the internal space was remodeled. The church is maintained under the auspices of the Athlone Union of Parishes, and each Sunday during the summer a service is held at four o’clock in the afternoon.

O’Rourke’s Tower:
Though named O’Rourke’s Tower after 10th century Connacht King Fergal O’Rourke, records show that it was finished in 1124 by Turlough O’Connor, King of Connacht, and Gilla Christ Ua Maoileoin, abbot of Clonmacnoise. Eleven years later it was struck by lightning, which knocked off the head of the tower. The upper part of the tower is later work, so there is some speculation that the masonry thus toppled in the storm of 1135 may have been reused in the building of McCarthy’s Tower.

North Cross: Oldest of the three extant crosses. Created c.800.
Only the limestone shaft and sandstone base (a former millstone) has survived. The decoration is non-Christian, with an image of Cernunnos, the Celtic god of hunting and fertility, displayed on the east face of the shaft. It appears that the piece was badly vandalized at some point in its history, a hypothesis which may explain its current state. 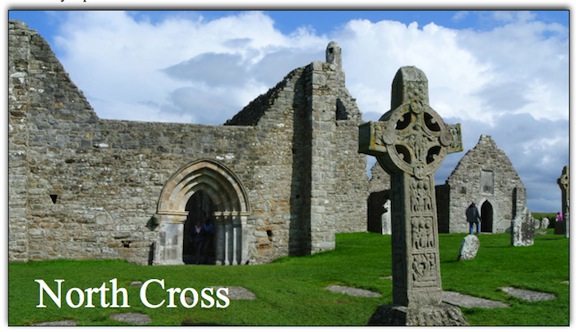 Temple Kelly:
All that remains of this church are the low-lying perimeter stones, which still give a good indication of the church’s original size.

Temple Ciarán: At 2.8 by 3.8 meters, the smallest church in Clonmacnoise.
Traditionally presented as the grave site of St. Ciarán. Excavations of the church unearthed the Clonmacnoise Crozier, but has produced no saintly remains.

Cross of the Scriptures:
This 4 meter high sandstone cross is one of the most skillfully executed of the surviving high crosses in Ireland, and of particular interest for its surviving inscription, which asks a prayer for Flann Sinna, King of Ireland, and Abbot Colmán who commissioned the cross. Both men were also responsible for the building of the Cathedral. The cross was carved from Clare sandstone c.900. The surface of the cross is divided into panels, showing scenes including the Crucifixion, the Last Judgement, and Christ in the Tomb. The original has been moved into the visitors’ centre; a convincing, if hollow, replica stands at the original site.

Cathedral: Building started around 909 (Chronicum Scotorum) by Flann and Colmán.
The west doorway has been recently (and somewhat controversially), comprehensively restored with the Gothic-style north doorway, often called the Whispering Arch, dating to the mid-15th century. The Cathedral is the largest of the churches at Clonmacnoise. Rory O’Connor, the last High King of Ireland, was buried near the altar in 1198, joining his father Turlough. Most of the graves currently seen in the church are those of the Coghlan family, whose patriarch extensively rebuilt the cathedral in the mid-seventeenth century. 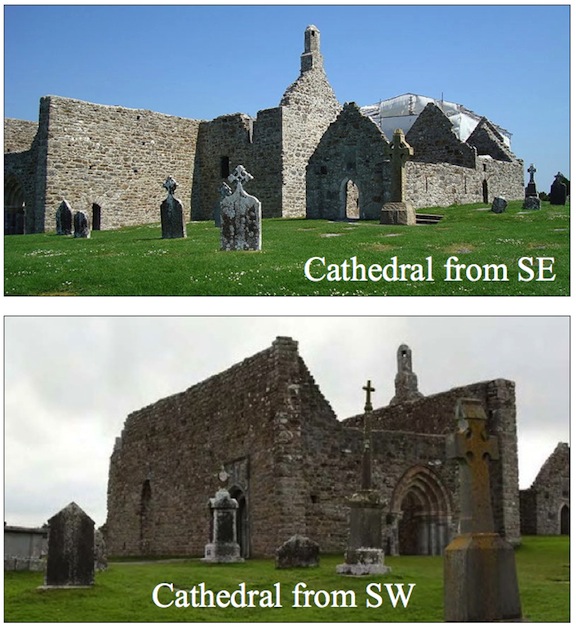 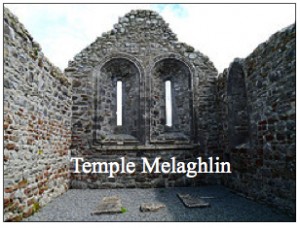 Temple Melaghlin: Built c.1200.
Also called the King’s Church, due to the fact that at least seven generations of Melaghlin Kings are said to be buried underneath the structure. The church is also believed to have housed the scriptorium, the room where the manuscripts were designed and decorated. 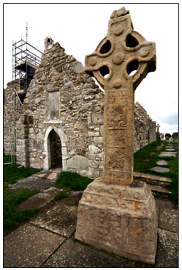 South Cross: A 9th-century piece originally situated at the southern end of the site’s central hub.
South Cross has one Christian scene on its west face, a rough carving of the Crucifixion of Christ. Many believe that the Cross may have been part inspiration for the later Cross of the Scriptures. Again, the original is in the interpretative centre, with a not particularly accomplished replica (wrong color, for a start) occupying its original site.

Temple Dowling: Sometimes referred to as MacClaffey’s Church.
Originally built in the 10th century, this tiny church is named after Edmund Dowling, who renovated it in 1689, placing a stone carving of his family crest above the door. 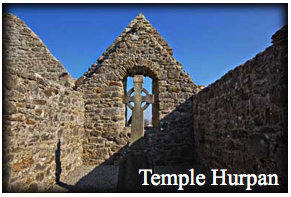 Temple Hurpan:
Built in the 17th century at the east end of Temple Dowling, this annex had no religious function outside of being a burial ground for some members of the local parish. 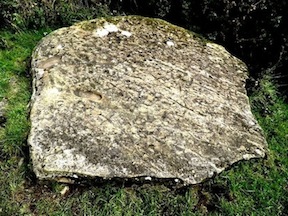 The Fairy’s or Horseman’s Stone:
Near the Chapel of Clonfinlough at Clonmacnoise there are several limestone boulders, one of which is called the Fairy’s or Horseman’s Stone. It has many cup-shaped hollows, crosses, daggers, and a pair of human feet (an example of a Petrosomatoglyph) possibly connected with the inauguration of Gaelic rulers. Dunadd (a rocky crag that may have been one time an island and now lies inland near the River Add) in Scotland has a well-known example of this tradition. 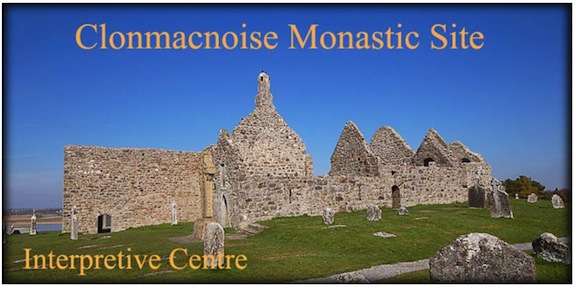 The site was handed over by the Church of Ireland to the Irish Government in 1955 and has been maintained by various departmental bodies since then. Currently the O.P.W. manages the site on behalf of the Department of the Environment and Local Government. The current visitors’ centre opened in 1993, replacing a wooden structure, and entry to the site is contingent on the payment of an entry fee seven days a week (from 1973–1985 a part-time guiding/interpretative service was maintained, which also required a small admission fee). The centre was designed to cater for a maximum of 80,000 visitors per annum. 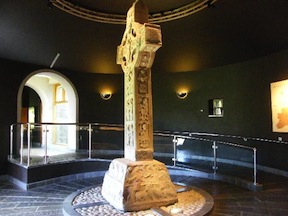 A small centre houses a theatre (56 seats) which runs the A.V., ‘Ciarán’s City Fair’ in English, German, French and Italian. If visiting during the high-season avoid the 10:00-12:00 and 14:00-16:00 rush as coach groups break their Dublin/Galway, Galway/Dublin trips at the site. A small number of publications are offered for sale in the centre, and given the absence of interpretative panels on the site, are an essential buy for those with an interest in understanding what it is they are looking at. Guided tours are available for groups, but have to be pre-booked.

The site attracted 169,000 visitors in 2007, but numbers have declined as Ireland’s reputation as an expensive destination led to a national fall in visitor numbers. The most recent figures suggest that in 2010 135,000 visited the site, with the highest daily total being around the 1,500 mark. The completion of the M6 Dublin/Galway motorway has also fed into the decline, given that the travel time from coast to coast is now just two-and-a-half-hours, a journey duration that no longer necessitates a pitstop at Clonmacnoise.

Also on site is a small coffee shop and toilets. A Fáilte Ireland Tourist Office is located outside the main site and stocks a wider selection of publications and gifts than the O.P.W. centre itself. A well-maintained, if hugely inadequate, car (thirty-six spaces) and bus park (four spaces) is located at the west end of the site. Very often visitors abandon their cars on the small road nearby, as do coach companies, a fact that makes the site difficult to access at times. 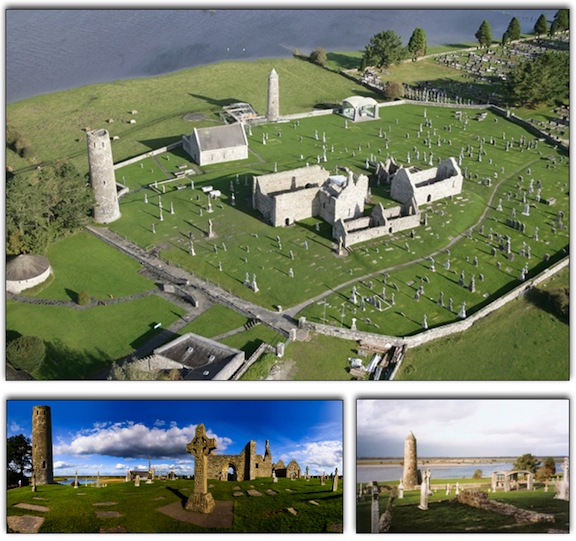 From Wikipedia, the free encyclopedia:  (https://en.wikipedia.org/wiki/Clonmacnoise)