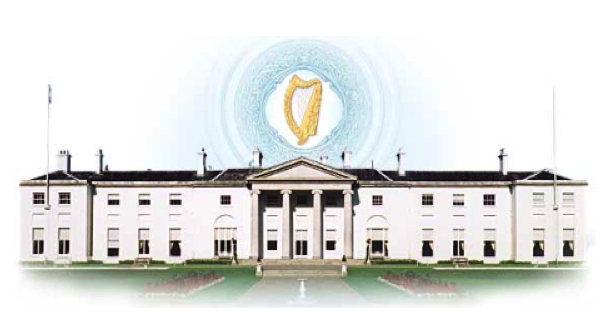 Built in 1751 Situated in the 1,752 acres of the Phoenix Park near Dublin, the original house was built by Park Ranger Nathaniel Clements.  By 1782 it had been acquired for use by the Viceroys who oversaw British rule in Ireland.  Clements received £25,000 for the house.

Occupancy
The house continued as the official residence of the Viceroys until 1922.  For much of the period of Home Rule that followed it was the residence of the Governors General, the Crown’s representatives during the new dispensation.  In 1938 it became the Official Residence of the President of Ireland and has been used for that purpose since.

Developments to House
There have been many improvements and additions to the house over the years, the most noteworthy being:

Present day
The house is now used as the official residence of the President of Ireland and is the setting for many public functions.  While it is not fully open to the public, some 15,000 people visit each year.

Office of the President
The Office of President was established by The Constitution (Bunreacht na h Éireann). The President is elected directly by the people. To be a candidate a citizen must be over 35 years of age and must be nominated either by:

Former or retiring Presidents may become candidates on their own nomination.

The term of office is 7 years and a President may not serve more than 2 terms. The President must reside in or near Dublin. St. Patrick’s Hall, Dublin Castle, is the venue for Inauguration ceremonies, at which each President takes an oath as provided in the Constitution.

The President represents all the people when undertaking official engagements at home and abroad. The President is Supreme Commander of the Defense Forces. There have been eight different holders of the office – Mary McAleese is the current President.

Powers and Functions
The formal powers and functions of the President are prescribed in the Constitution. The President, who does not have an executive or policy role, exercises them on the advice of the Government.

There are some specific instances where the President has an absolute discretion, such as in referring a Bill to the Supreme Court for a judgment on its constitutionality or in refusing to dissolve Dáil Éireann (lower house of parliament) on the advice of a Taoiseach (Prime Minister) who has ceased to retain a majority. Additional functions can be conferred on the President by law. A special (Presidential) Commission acts whenever the President is absent.

Other office holders appointed by the President, on the advice of the Government, include Judges, the Attorney General, the Comptroller and Auditor General, and Commissioned officers of the Defense Forces.

Bills enacted by Houses of the Oireachtas are signed into law by the President.  A Bill must be signed on the 5th, 6th or 7th day after it is presented to the President, but there are some situations when the President may sign a Bill earlier.

Referring a Bill
The President has an absolute discretion to refer a Bill to the Supreme Court to get a judgement on its constitutionality (but not a Money Bill or a Bill to amend the Constitution).  Before making a referral the President must first consult the Council of State.  The constitutionality of any Bill signed following a referral may not be subsequently challenged in the courts.

The President, after consultation with the Council of State, may address the Houses of the Oireachtas (parliament) on any matter of national or public importance.  The text of any such address must be approved by the Government.

Representing the People
The President represents all the people and does so in many different ways, for example when receiving foreign Heads of State on visits to Ireland or when making State Visits abroad.  These and other visits abroad provide valuable opportunities to promote Ireland’s interests in the international arena and to strengthen links with the Irish Diaspora around the world.  Irish public and private enterprises frequently organize promotional events to coincide with Presidential visits abroad.

At home the President undertakes a wide range of engagements with particular emphasis on valuing the contribution of local community and self-help groups and in promoting peace and reconciliation throughout the island of Ireland.  Whether participating in formal ceremonial, addressing international conferences or meeting people in a wide range of informal settings, the President is giving expression to the undertaking in the oath of office to “dedicate my abilities to the service and welfare of the people of Ireland”.