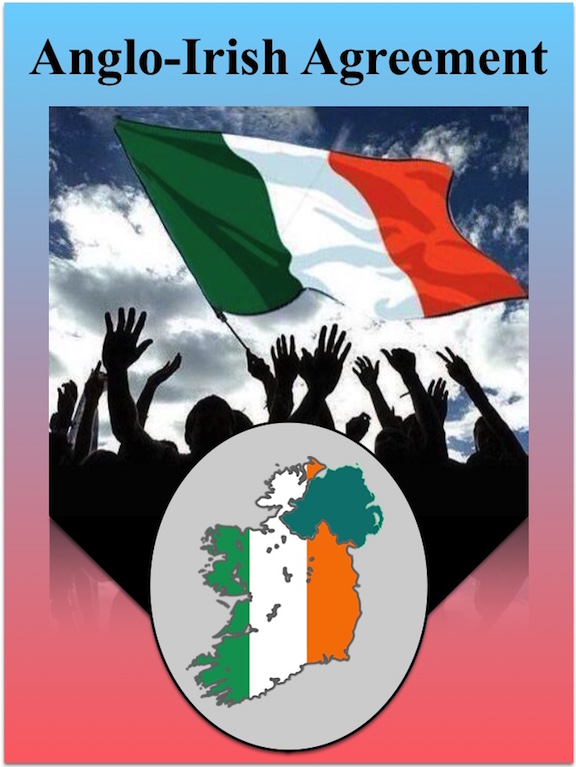 The Anglo-Irish Agreement was an agreement between the United Kingdom and the Republic of Ireland which aimed to help bring an end to the Troubles in Northern Ireland. The treaty gave the Irish government an advisory role in Northern Ireland’s government while confirming that there would be no change in the constitutional position of Northern Ireland unless a majority of its people agreed to join the Republic. It also set out conditions for the establishment of a devolved consensus government in the region.

The Agreement was signed on 15 November 1985 at Hillsborough Castle, by the British Prime Minister, Margaret Thatcher, and the Irish Taoiseach, Garret FitzGerald. 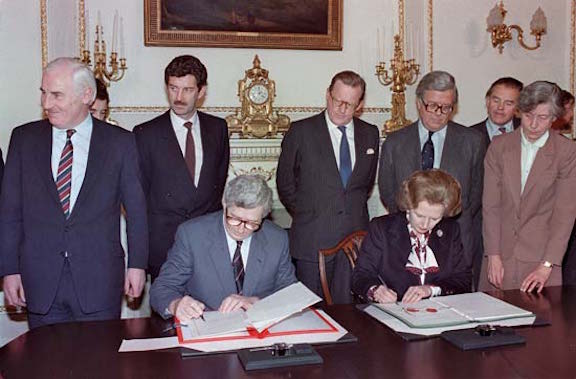 The agreement established the Anglo-Irish Intergovernmental Conference, made up of officials from the British and Irish governments.

This body was concerned with political, legal and security matters in Northern Ireland, as well as “the promotion of cross-border co-operation”. It had a consultative role only – no powers to make decisions or change laws were given to it.

The Conference would only have power to make proposals “insofar as those matters are not the responsibility of a devolved administration (having the power to make legislation relevant to the area) in Northern Ireland”. This provision was intended to encourage the unionists (who opposed Irish government involvement in Northern Ireland through the Conference) into a power-sharing devolved government.

The conference had a permanent secretariat, including officials from the republic’s Department of Foreign Affairs, based in the Belfast suburb of Maryfield. The presence of civil servants from the Republic particularly incensed unionists.

Reaction to the Agreement

The British House of Commons voted for a motion to approve the Agreement by a majority of 426 (473 for and 47 against, the biggest majority during Thatcher’s premiership). The majority of the Conservative Party voted for it (although there were some unionist MPs in the party who opposed it), as did the Labour Party (committed to “unification by consent”, although some left-wing MPs such as Tony Benn and Ken Livingstone opposed it because they believed Britain should withdraw from Northern Ireland), and the Liberal-SDP Alliance.

The Agreement was rejected by unionists because it gave the Republic of Ireland a role in the governance of Northern Ireland for the first time ever, and because they had been excluded from the agreement negotiations.

The Ulster Unionist Party (UUP) and Democratic Unionist Party (DUP) led the campaign against the agreement, including mass rallies, strikes, civil disobedience and the mass resignation from the British House of Commons of all the unionist MPs. The DUP and UUP collectively organized 400,000 signatures in a petition against the Agreement. There was also a mass rally outside Belfast City Hall on 23 November against the Agreement, with Northern Irish historian Dr Jonathan Bardon saying of it: “Nothing like it had been seen since 1912”.

Estimates of the number of people there vary: The Irish Times claimed 35,000 people were present; the News of the World, The Sunday Times and the Sunday Express claimed 100,000; the lecturer in Politics at the University of Ulster, Arthur Aughey, claimed over 200,000 people were there; and the organizers of the meeting said 500,000 attended.

The day after the rally a MORI opinion poll in Northern Ireland found that 75% of Protestant Unionists would vote ‘No’ if a referendum was held on the Agreement, with 65% of Catholic Nationalists saying they would vote ‘Yes’.

The UUP MP Enoch Powell asked Thatcher in the Commons the day before she signed the Agreement: “Does the Right Hon. Lady understand—if she does not yet understand she soon will—that the penalty for treachery is to fall into public contempt?”

The UUP leader James Molyneaux spoke of “the stench of hypocrisy, deceit and treachery” and later said of “universal cold fury” at the Agreement such as he had not experienced in forty years of public life.

Ian Paisley, a few days later to his congregation, compared Thatcher to “Jezebel who sought to destroy Israel in a day”.

He wrote to Thatcher: “Having failed to defeat the IRA you now have capitulated and are prepared to set in motion machinery which will achieve the IRA goal… a united Ireland. We now know that you have prepared Ulster Unionists for sacrifice on the altar of political expediency. They are to be the sacrificial lambs to appease the Dublin wolves”.

In his letter to FitzGerald, Paisley said: “You claim in your constitution — jurisdiction over our territory, our homes, our persons and our families. You allow your territory to be used as a launching pad for murder gangs and as a sanctuary for them when they return soaked in our people’s blood. You are a fellow traveller with the IRA and hope to ride on the back of their terrorism to your goal of a United Ireland. We reject your claims and will never submit to your authority. We will never bow to Dublin rule”.

The moderator of the Presbyterian Church of Ireland, Dr Robert Dickinson, wrote to Thatcher and said the Agreement was “the beginning of the process of edging Northern Ireland out of the United Kingdom – sovereignty has been impinged”.

Thatcher’s close friend and former Parliamentary Private Secretary Ian Gow resigned from his Treasury post in protest at the Agreement. 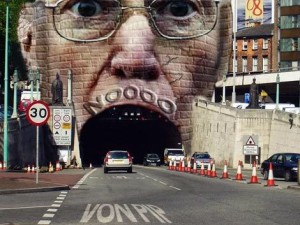 UUP politicians Christopher and Michael McGimpsey even brought a suit against the Irish government in the High Court of Ireland, arguing that the Agreement was invalid because it contradicted  Articles 2 and 3 of the Constitution of Ireland. (This argument was unusual coming from a unionist because of the traditional unionist opposition to these two articles.)

The case failed in the High Court, and again on appeal to the Supreme Court.

Of the main parties in Northern Ireland, only the nationalist Social Democratic and Labour Party (SDLP) and the cross community Alliance Party supported the agreement.

The by-elections called after the Unionist MPs resigned did not quite offer the electorate a clear-cut choice on the agreement due to the reluctance of the other parties to contest them. No unionist candidate opposed another, whilst both the SDLP and Sinn Féin only contested the four seats where at the previous election there had been a majority of votes cast for nationalist candidates.

The Alliance formally committed to fighting all the seats on a platform of support for the Agreement, but some local branches declined to select candidates. The Workers’ Party stood in a few seats.

In four constituencies where no party would oppose the Unionist MP a man called Wesley Robert Williamson changed his name by deed poll to “Peter Barry” (the name of the Irish Foreign Minister) and stood on the label “For the Anglo-Irish Agreement” but did not campaign. Despite this he garnered nearly 7,000 votes and saved three deposits.

The unionist parties between them garnered over 400,000 votes and over 71% of the total poll, but as no by-elections took place in the staunch nationalist seats of West Belfast and Foyle this latter figure is skewed. Nevertheless the unionists trumpeted the results as a rejection of the Agreement by the electorate.

The Orange Order in Scotland claimed that one thousand people left the Conservative Party in protest against the Agreement. In 1990 Thatcher said that “The Anglo-Irish Agreement had alienated some pro-Ulster supporters in crucial constituencies” in Scotland.

Thatcher was taken aback by the ferocity of the unionist response and in her memoirs she said their reaction was “worse than anyone had predicted to me”. She furthermore claimed that the Agreement was in the tradition of British governments refraining “from security policies that might alienate the Irish Government and Irish nationalist opinion in Ulster, in the hope of winning their support against the IRA”. However, Thatcher perceived the results of this to be disappointing because “our concessions alienated the Unionists without gaining the level of security co-operation we had a right to expect. In the light of this experience it is surely time to consider an alternative approach”.

In 1998 Thatcher said she regretted signing the Agreement and said of Enoch Powell’s opposition to the Agreement: “I now believe that his assessment was right”.

The Agreement was rejected by republicans because it confirmed Northern Ireland’s status as a part of the UK. The Provisional Irish Republican Army (IRA) continued their violent campaign and did not endorse the agreement. Sinn Féin’s president, Gerry Adams, denounced the Agreement: “… the formal recognition of the partition of Ireland… [is] a disaster for the nationalist cause… [it] far outweighs the powerless consultative role given to Dublin”. On the other hand, the IRA and Sinn Féin claimed that the concessions made by Great Britain were the result of its armed campaign, from which the SDLP gained political credit.

The Agreement was approved by Dáil Éireann, 88 votes to 75 and by Seanad Éireann by 37 votes to 16. The Irish nationalist Fianna Fáil political party, the main opposition party in Ireland, also rejected the Agreement. The Fianna Fáil leader, Charles Haughey, claimed the Agreement was in conflict with Articles 2 and 3 of the Constitution of Ireland because it officially recognized British jurisdiction in Northern Ireland.

It was also opposed by the Independent TD’s Neil Blaney and Tony Gregory, with Blaney describing the agreement as “a con job”. Despite this opposition, all the other main parties in the Republic supported the Agreement, and it was ratified by the Oireachtas.

Prominent Irish Labour Party member Mary Robinson, who subsequently became President of Ireland, resigned from the Irish Labour Party because she believed that the Agreement “could not achieve its objective of securing peace and stability within Northern Ireland… because… it would be unacceptable to all sections of Unionist opinion”.

An opinion poll taken shortly after it was signed found that in the Republic 59% approved of the Agreement, 29% opposed it and 12% had no opinion. FitzGerald’s government’s approval ratings went up 10% to 34%. Haughey’s opposition to the Agreement was approved by 32%, with 56% opposed. 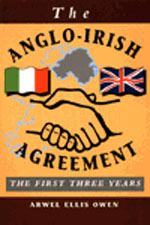 The Agreement failed to bring an immediate end to political violence in Northern Ireland; neither  did it reconcile the two communities.

At a strategic level, the agreement demonstrated that the British recognized as legitimate the wishes of the Republic to have a direct interest in the affairs of Northern Ireland. It also demonstrated to unionists that they could not veto political change as, in the end, the British state was stronger than they.

Republicans were left in the position of rejecting the only piece of constitutional progress (in the eyes of many nationalists or republicans) since the downfall of Stormont a decade earlier.

The Agreement would also indirectly affect the outcome of the election of Charles Haughey as Taoiseach in the aftermath of the 1987 Irish General Election which resulted in a hung Dáil.

This article taken from: http://en.wikipedia.org/wiki/Anglo-Irish_Agreement   (edited by Greg Seán Canning)