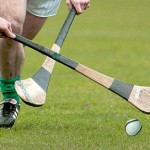 Hurling is a game similar to hockey, in that it is played with a small ball and a curved wooden stick. It is Europe’s oldest field game. When the Celts came to Ireland, they brought with them a unique culture, their own language, music, script and unique pastimes. One of these pastimes was a game now called hurling. It features in Irish folklore to illustrate the deeds of heroic mystical figures and it is chronicled as a distinct Irish pastime for at least 2,000 years.

The stick, or “hurley” (called camán in Irish) is curved outwards at the end, to provide the striking surface. The ball or “sliothar” is similar in size and style to a baseball but has raised ridges.

Hurling is played on a pitch approximately 137m long and 82m wide. The goal-posts are the same shape as on a rugby pitch, with the crossbar lower than a rugby one and slightly higher than a soccer one.

You may strike the ball on the ground, or in the air. Unlike hockey, you may pick up the ball with your hurley and carry it for not more than four steps in the hand. After those steps you may bounce the ball on the hurley and back to the hand, but you are forbidden to catch the ball more than twice. To get around this, one of the skills is running with the ball balanced on the hurley. To score, you put the ball over the crossbar with the hurley or under the crossbar and into the net by the hurley for a goal, the latter being the equivalent of three points.

The actual line out on the playing field is as follows: 

Another view of the actual line out on the playing field is shown below:

Players wear a jersey with their team colours and number on the back. Both teams must have different colour jerseys. The goalkeepers’ jerseys must not be similar to the jersey of any other player. Referees normally tog out in black jerseys, socks and togs.

Goalkeepers may not be physically challenged whilst inside their own small parallelogram, but players may harass them into playing a bad pass, or block an attempted pass.

Teams are allowed a maximum of three substitutes in a game. Players may switch positions on the field of play as much as they wish but this is usually on the instructions of team officials.

Officials for a game comprise of a referee, two linesmen (to indicate when the ball leaves the field of play at the side and to mark ’65” free kicks and 4 umpires (to signal scores, assist the referee in controlling the games, and to assist linesmen in positioning ”65′ frees). 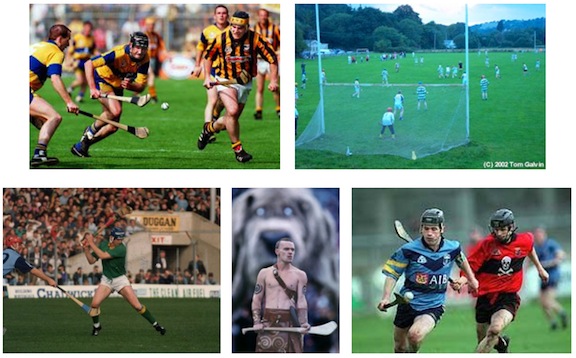